DMK, Cong have mastered the art of spreading lies : PM 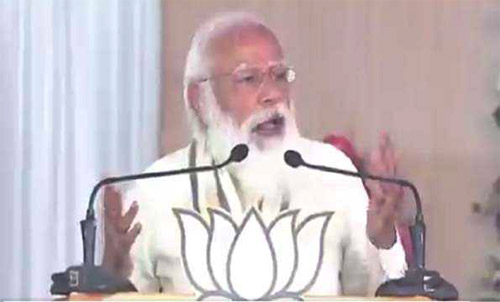 Madurai, Apr 2 (UNI) Prime Minister Narendra Modi on Friday slammed the DMK and its ally, the Congress, and said these two parties have mastered the art of not working and spreading lies about those who actually work  Addressing an election rally head of the April six Assembly polls in this temple town, he said it was the Congress-led UPA government, in which the DMK was a partner, had banned jallikattu and it was only restored by the AIADMK government in Tamil Nadu and the BJP-led NDA at the Centre.
Accusing the DMK and Congress of not having any real agenda to talk about, he said they should control their lies because people are not foolish.
'Congress-DMK keep showing themselves as the only protectors of Tamil Culture, but the facts suggest something else', he said, adding, the AIIMS--for which Mr Modi had earlier laid the foundation stone--would soon come up in this city.Pointing out that in the 2016 Tamil Nadu Congress manifesto, there was a call for ban on Jallikattu (the traditional bull taming sport heldduring annual Pongal festivities in January), Mr Modi both the Congress and DMK should be ashamed of themselves.
When UPA was in power in Delhi in 2011 and DMK had big ministries in the Central government, the same UPA regime banned Jallikattu.
One UPA leader even described Jallikattu as a barbaric practice, the Prime Minister charged.'People sought a solution and wanted Jallikatu to continue. Our government then cleared Ordinance by AIADMK, which allowed it to  take place.
Asserting that DMK and Congress will neither guarantee safety nor dignity, he said the DMK tried to make peace-loving Madurai, into
mafia because of complications in DMK's first family.
'They've not understood the ethos of Madurai. So, no wonder, leaders keep insulting women again and again', Mr Modi said,
adding 'Madurai is a city that never sleeps and remain awake always.''Madurai teaches us important lessons on empowering Nari Shakti. (women empowerment). We see it in the way women are worshippedand reverred. Our efforts in the Swachh Bharat Mission, Ujjwala Yojana and other such schemes are aimed at empowering women', he said.
Mr Modi said he was sure that Madurai has woken up to the political realities and will vote for development and progress agenda assured by the NDA.