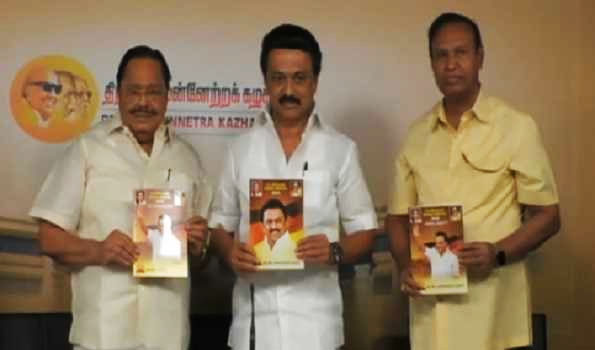 Chennai, Mar 13 (UNI) The Opposition DMK in Tamil Nadu on Saturday made a slew of promises in its election manifesto that included Rs 4,000 each for ration card holders, besides reducing the prices of aavin milk, petrol, diesel and cooking LPG gas cylinders and scrapping of NEET, if it was voted to power.
Releasing the manifesto, which contained 500 announcements for the April six Assembly elections, DMK Chief M K Stalin said Rs 4,000 would be given as assistance to all rice ration card  holders in the State taking into account the difficulties faced by the people during the covid pandemic.
In an attempt to woo the women voters, he also promised that  the price of aavin milk would be reduced by three a litre and that of petrol and diesel by Rs five and Rs four respectively.
Apart from providing Rs 100 subsidy for LPG cooking gas cylinders,he announced extra one kg sugar and restoration of supply of urad
dhal for all ration cardholders,While promising to increase the women reservation from 30 percent to 40 per cent in all government departments, Mr Stalin said an assistance of Rs one crore would be given to the family of police personnel, who die in harness.
In an attempt to to prove that the party was not anti-Hindu, he  said rope car facilities would be introduced in all the hill temples,
besides allocation of Rs 1000 crore for renovation and maintenance  of all hindu temples, and Rs 200 crore for renovation of mosques
and churches.  While promising that the Assembly proceedings would be telecast  live, the DMK Chief also promised opening of 'Kalaignar' canteens
(Unagavam) across the state, in a bid to counter the huely popular  'Amma' canteens, launched by the AIADMK government headed by late Chief Minister J Jayalalithaa.
While promising to scrap NEET in the first Assembly session by  enacting an Act if it was voted to power, he also announced setting up of special courts to hear corruption cases against the AIADMK, setting up of welfare board for media personnel,  declaration of irukkural as a National treasure, free milk for students in the morning in all government schools, and bringing Education under the State list, separate budget for agriculture, citzenship rights for all refugees.
He said a separate Ministry would be created to implement the poll promises.