Days after being on NCB’s radar, Ananya Panday shares a thoughtful quote about finding rainbow 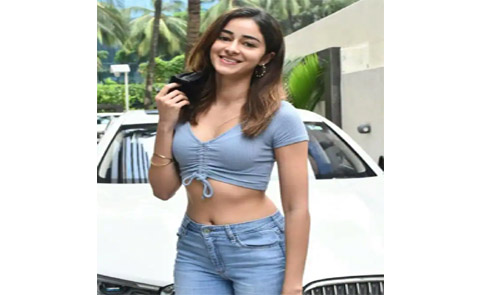 Ananya Panday recently made the headlines for an unfortunate reason after her name had cropped up in the ongoing high profile drugs case. It was reported that a raid was conducted at Ananya’s residence, she was also summoned to appear before the Narcotics Control Bureau for interrogation in the case. While a lot has been happening in the case, Ananya had been maintaining a low profile ever since. However, the Student of The Year 2 actress has now shared a thoughtful post on social media.
In the video shared on Instagram, Ananya was seen dressed in a white tank top and was sitting in a car enjoying the scenic natural beauty around. The Pati Patni Aur Woh actress had seen zooming in the background and focussed on the rainbow amid the greenery, Besides, the cloudy sky added on to the beauty of the video. In the caption, Ananya wrote, “You can’t have a rainbow without a little rain”. Soon, her mother Bhavana Pandey took to the comment section and dropped hearts emoticons for Ananya’s video.
Meanwhile talking about the work front, Ananya Panday, who was last seen in Ishaan Khatter starrer Khaali Peeli, will be next seen in Puri Jagganadh’s Liger which also has Vijay Deverakonda in the lead. The movie happens to be a pan India which is scheduled to release next year. Apart from this, Ananya is also working on Shakun Batra’s yet to be titled movie with Siddhant Chaturvedi and Deepika Padukone and Arjun Varain Singh’s Kho Gaye Hum Kahan with Siddhant and Gourav Adarsh.