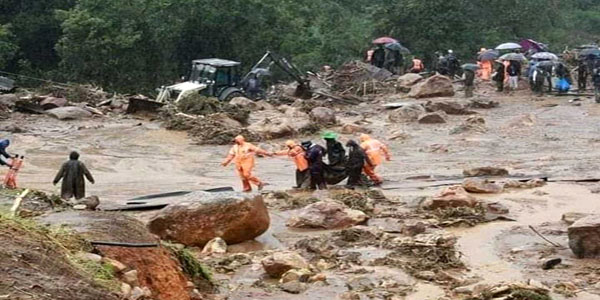 The death toll in Pettimudi landslide in Munnar rose to 28 with two more bodies being retrieved from the debris during a search on Sunday.

The search is still on to find the remaining 39 people missing after the landslide.

Austerity marked even the final rites of the people who had lived a life of struggle with limited resources in a row of small housing units near tea plantation.

The 26 bodies recovered on Saturday were buried in three pits at a ground near Rajamala Hospital after their post-mortem was completed.

Ministers MM Mani and E Chandrasekharan were camping in the area to oversee the search operations.

Kannan Devan Hill Plantations Company has announced financial assistance of Rs five lakh each to the families of the deceased.

Out of 19 school children who went missing in the landslide tragedy, bodies of two were recovered.

"Three days after the settlements were swept away due to the landslides, authorities have decided to take help of sniffer dogs to trace the persons buried under the debris", officials said.