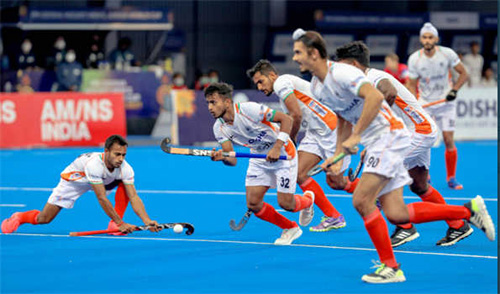 Bhubneswar,  (UNI) Defending champions India finished fourth at the Junior Hockey World Cup after losing 1-3 to France in the bronze medal contest at the Kalinga stadium here on Sunday.

Captain Timothy Clement led France to a podium finish after scoring another hattrick against the hosts. This was his second hattrick, and it also came against India in the same tournament.

For India, birthday boy Sudeep Chirmako smoked one into the goalpost in the third quarter, but it wasn't enough as France dominated the match, except for the first quarter where they were seen tardy.

India had a very early chance in the 12th minute. Araijeet Singh Hundal spanked one at the goal, but it violently hit the post and rebounded.

Roles reversed as the first quarter came to a close. France earned their first penalty corner in the very beginning of the second quarter, but Clement who was the thorn in India's side in their last meeting, hit the ball off target.

Suddenly, it was all France with India struggling to get a stick in after Shardanand Tiwari was green carded, which turned out to be costly. Taking advantage of it, Clement hammered his first goal of the match and put France ahead 1-0 in the 26th minute.

Clement got the second goal for France in the 34th minute and put India on the ropes in the third quarter. France was awarded the penalty corner after mounting several attacking moves. Soon after India looked to get a few attacks of their own going.

With 3 minutes left for the third quarter, Sudeep came up with his moment of magic as he reverse-flicked the ball into the post, reducing India's margin to 1-2 in the 42nd minute, making the rest of the game interesting.

But, Clement had different plans. Soon he hammered his hat trick in the very beginning of the fourth quarter, helping France take a 3-1 lead. India got a few chances as Hundal got a cross across goal and Sudeep tried to flick it past the back post, but missed.

As France controlled the match with less than 10 minutes to go, Sudeep earned a penalty corner for India in the 51st minute, but Sanjay went very close with his shot but missed. Uttam Singh and Hundal combined for an attack, but could not control the ball in the box. .

The French bench started celebrating with 30 seconds to go and the boys in Blue sat with their faces clasped in their hands as their run finished with a disappointing 4th place.