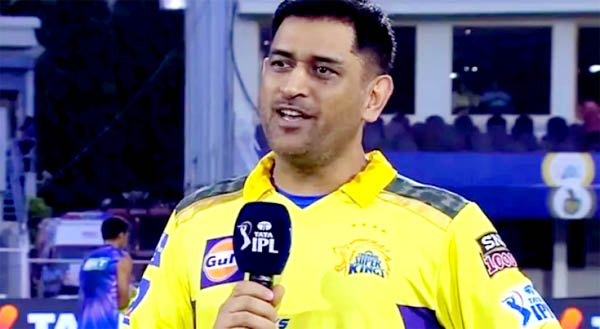 Mumbai, (UNI) Former Team India captain Mahendra Singh Dhoni on Friday said he would definitely play next year's IPL because it won't be nice to do that to CSK fans. "Definitely, because it will be unfair not to say thank you to Chennai. Won't it be nice to do that to CSK fans," he said at the toss when he was asked whether he would play next year's IPL season. For CSK, this season has been dismal as they have been ousted from the playoffs pretty early. For their top players as well, it has been a forgetful season.

Dhoni, Ambati Rayadu and Robin Uthappa have not been among big runs as they managed 206, 271 and 230 runs respectively. The bowling also remained weak as they lost Josh Hazlewood and Deepak Chahar. Matheesha Pathirana, who is a carbon copy of Lasith Malinga in terms of his bowling action, is learning in the nets. Though Mukesh and Mahesh Theekshana picked 16 and 12 wickets, they are yet to prove themselves as match winners. Probably, Dhoni wants to play next IPL to see CSK sign off well before he hangs up his boots for the franchise.