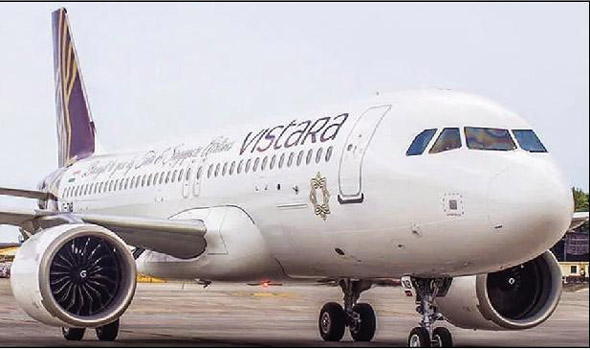 Bhopal: The flight going from Delhi to Bangalore had to make an emergency landing in Indore. A woman passenger going from Delhi to Bangalore suddenly started having severe chest pain and nervousness. On this, the flight was made to land at Devi Ahilyabai Holkar Airport on Monday night itself. From here the woman was taken to a nearby private hospital. She was discharged after first aid. The flight remained at Indore airport for an hour.
Devi Ahilyabai Holkar Airport officials said that the pilot of Vistara Airlines' Delhi to Bangalore flight (UK-807) contacted Indore Air Traffic Control (ATC) at 9.45 pm on Monday, seeking permission for the flight's medical emergency landing. The pilot said that a female passenger on board the plane was experiencing chest pain and nervousness. ATC immediately allowed the pilot to divert the aircraft and bring it to Indore.
Medical emergency alert was also issued. An ambulance and doctor were immediately prepared at the airport. The plane landed at the airport at 10.07 pm. After this, the female passenger was shifted in an ambulance to the nearby Banthia Hospital. In the investigation here, the cause of chest pain was revealed to be acidity. The woman passenger has been named as Ranjita Sarkar.
The flight took off from New Delhi at 8.40 pm. At 9.45 pm, the pilot sought permission for an emergency landing. The flight landed at Indore airport at 10.07. At 11.07 pm the flight flew back to Bengaluru. The arrival time of Bangalore is 11.20 PM. The flight reached Bangalore with a delay of 1 hour.

Indigo cancels Chennai flight, Raipur flight departs 1 hour late
Indigo Airlines canceled its flight from Chennai to Indore and back to Chennai on Tuesday morning, after which the passengers who had booked were upset. Indigo Airlines flight (6E-6309) departs from Chennai to Indore at 7.25 am and leaves Chennai at 8 am. Company officials say that the passengers were already informed about the cancellation of the flight. Passengers who have booked have been given the option of rebooking and refund.
At the same time, the IndiGo flight (6E-7112) from Indore to Raipur at 9 am was delayed by an hour. Airport director Prabodh Sharma said that the Indore-Raipur flight was delayed by an hour due to bad weather in the morning.