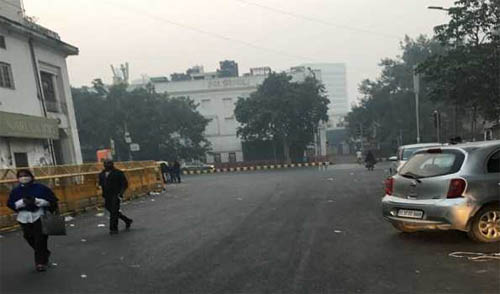 New Delhi, Nov 25 ( UNI ) The air quality in the national capital continued to remain in the 'very poor' category on Thursday, as the, air quality Index (AQI) stood at 362 according to the System of Air Quality and Weather Forecasting and Research (SAFAR).

The air quality Index (AQI) on Wednesday was recorded at 328.

According to the SAFAR bulletin, the effective farm fire count has reduced to 432 and its contribution to Delhi’s PM 2.5 on Thursday is 2 percent.

Earlier the agency said from November 27 onwards local surface winds are likely to increase which will result in improvement of air quality.

According to data from Central Pollution Control Board the Air Quality Index in the neighbouring parts of Delhi, also was in the 'very poor' to 'severe' category including Faridabad (at 438), Ghaziabad (314), Gurugram (334) and Noida (414).

Meanwhile the Delhi government on Wednesday said that schools, colleges and educational institutions in the national capital will reopen from Monday, November 29 onwards.

“Schools, colleges and educational institutions will be allowed to reopen in the city. Work from home in government offices will end on November 29, but we request people to use public transport" Delhi Environment minister Gopal Rai said on Wednesday.

According to the India Meteorological Department (IMD) the sky will remain clear with the minimum and maximum temperature likely to hover around 10 and 28 degree Celsius respectively.

“The relative humidity at 0830hrs in the morning stood at 95 percent,” IMD said.