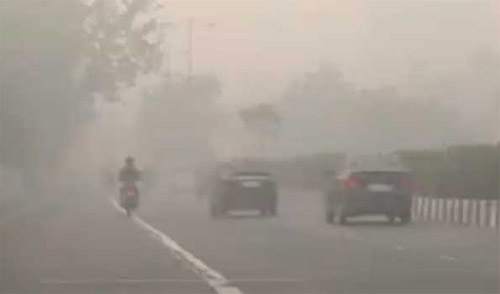 New Delhi, Nov 24 (UNI) After a little respite from the pollution, air quality in the National Capital again slipped into the 'very poor' category on Wednesday, as the, air quality Index (AQI) stood at 328, according to the System of Air Quality and Weather Forecasting and Research (SAFAR).

The air quality Index (AQI) on Tuesday was recorded at 282 which was in the poor category.

According to the SAFAR bulletin, from November 27 onwards local surface winds are likely to increase which will result in improvement of air quality.

“The effective farm fire count has reduced to 770 and its contribution to Delhi’s PM2.5 on Wednesday is 3 percent as per the agency”, said the agency.
The concentrations of PM 2.5 and PM 10 stood at 156 in the 'very poor' and 292 in the 'poor' category respectively around 11 am, as per the agency.

Several areas in the national capital including ITO, Lodhi Road, and Mathura Road recorded air quality in "very poor" air with an AQI of 333, 303, and 346 while the AQI at Anand Vihar and Jahangirpuri were in the "severe" category with an AQI 422 and 436 respectively.

Meanwhile, the Delhi government on Monday lifted the ban on construction activities after the marginal improvement in the national capital’s air quality but schools will remain shut till further orders.

Earlier on its Sunday order the Delhi government extended the ban on the entry of trucks carrying non-essential commodities into the city and work from home for its employees until November 26.

According to the India Meteorological Department (IMD) the sky will remain clear with the minimum and maximum temperature likely to hover around 9 and 27 degree Celsius respectively.
“The relative humidity at 0830hrs in the morning stood at 95 percent,” IMD said.