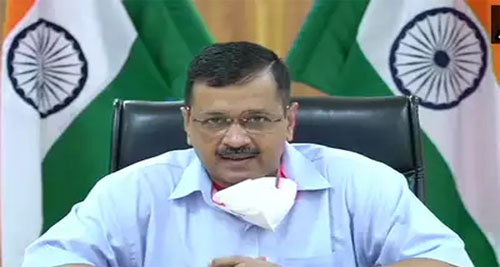 Chief Minister Arvind Kejriwal on Monday said despite relaxations on coronavirus-induced lockdown were announced on May 17 in Delhi, the situation remains under control with no need to worry.

Addressing a digital press conference, Mr Kejriwal said, "It has been a week since some relaxations were given on May 17 and after a period of one week, I can say that the situation is under control and there is no need to worry. We had expected a sudden rise in the number of cases after the relaxations and the same has happened, but there is no need to worry. The situation will get worrisome in two cases, first, if there is a steady rise in the death rate, and second if the cases are so severe that it leads to the collapsing of our whole healthcare system."

"I have been saying this time and again, there should be no deaths and people should recover and go back to their homes as soon as possible. It would be a troublesome situation if the number of severe patients increases to the extent that there is a non-availability of beds, oxygen, ventilators, and other healthcare infrastructure."

The chief minister said there have been 3,500 new coronavirus cases and around 2,500 patients have recovered in the last week since the relaxations.
He also said that around 2,000 new beds have been added in 117 private hospitals, along with 2,500 beds currently available in the government hospitals in Delhi.

“Yesterday, the Delhi government had issued an order that 117 private hospitals of Delhi should save at least 20 per cent of their beds for the treatment of Corona patients. There are currently 2,000 beds available in government hospitals and 2,500 beds available in private hospitals in Delhi,” he said.
Mr Kejriwal said that there were 13,418 cases in Delhi till yesterday, out of which 6,540 cases have recovered and 6,617 are active cases. There have been 261 deaths.