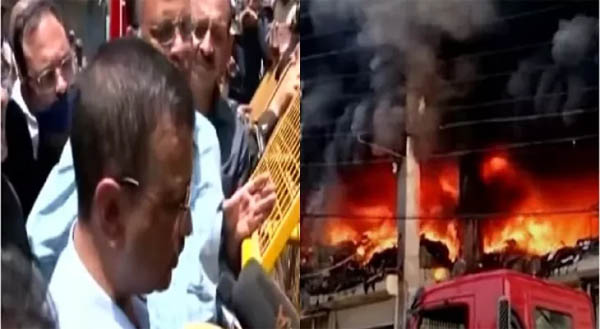 New Delhi, May 14 (UNI) Delhi Chief Minister Arvind Kejriwal on Saturday said he has ordered a Magisterial investigation into the fire tragedy that consumed 27 lives in a building near the Mundka Metro Station. "This is a very tragic incident. I have ordered a Magisterial inquiry. Based on the report, action will be taken. No one will be spared," Kejriwal told reporters after visiting the site. The Chief Minister also announced ex-gratia of Rs 10 lakh for the families of the deceased and Rs 50,000 for the injured. "The Delhi government will give a compensation of Rs 10 lakh to the kin of deceased and Rs 50,000 for those injured." On identification of the charred bodies, Kejriwal said that the bodies will be handed over to the families based on DNA tests. Meanwhile, Deputy Commissioner of Police Sameer Sharma said that 29 persons were reported missing. Earlier, the police filed a case. "We have registered an FIR under sections 34, 120, 304 and 308 of the Indian Penal Code (IPC)," Sharma said. He said two persons have been arrested so far. Police said the building which caught fire was a four-storey commercial condominium, occupied by several companies as their office space.