Delhi metro to resume from Sep 7 with truncated timings 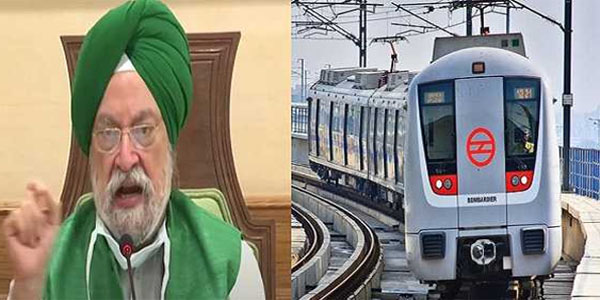 The Delhi Metro will resume from September 7, Monday, onwards in the Nation Capital Region (NCR) in a graded manner with truncated working hours in view of COVID-19 pandemic, the Delhi Metro Railway Corporation announced here on Wednesday.

As per the guidelines, the metro will resume in three stages from September 7 to 12 with specific timings.

On September 7, metro services will be resuming on Line-2 (Yellow Line) from Samaypur Badli to HUDA City Centre including Rapid Metro, Gurugram and the passenger service timings in morning will be 0700 hrs to 1100 hrs and in evening 1600 hrs to 2000 hrs.

On September 9, it will resume on Line-3/4 (Blue Line) from Dwarka Sec-21 to Noida Electronic City/Vaishali & Line-7 (Pink Line) from Majlis Park to Shiv Vihar and the passenger service timings will be same.

According to the DMRC, in Stage-2, Metro services will start from September 11 and in this, the time for passenger service will be increased from four hours to six hours.

On September 11, in addition to stage-1 Lines, metro services will be resuming on Line-8 (Magenta Line) from Janakpuri West to Botanical Garden & Line-9 (Grey Line) from Dwarka to Najafgarh will be also made operational and the passenger service timings in morning from 0700 hrs to 1300 hrs and in evening from 1600 hrs to 2200 hrs.

In addition to Stage-1 and Stage-2 Lines, Airport Express Line from New Delhi to Dwarka Sec-21 will be also operational.

As per the SOPs, entry-exit gates in containment zones to be closed, wearing of face mask to be mandatory for all passengers and staff and only asymptomatic persons to be allowed to travel after thermal screening at entry into the stations.

The DMRC chief Mangu Singh said train services will commence with adequate frequency as they were before March 22 which may be increased or decreased as per requirement. However, due to increase in dwell time of trains at stations, there will be minor increase in time required for performing a trip.

Trains will not stop at stations falling in containment zone and such stations will remain closed for public. Similarly, some of the stations may be skipped if social distancing is not adhered by the passengers, he said.

The metro services in the NCR region were suspended from March 22 following the outbreak of COVID-19 in India.