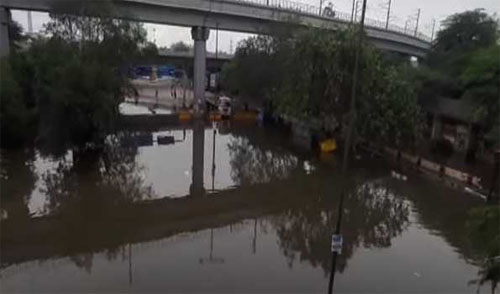 New Delhi, Sep 2 (UNI) For the third straight day on Thursday, citizens in Delhi-NCR woke up to a heavy downpour and thunderstorms, a day after the city received the highest September rainfall of 118 mm in 19 years.

The Indian Meteorological Department has forecast moderate to heavy intensity rain over many parts of Delhi and adjoining areas during the next two hours.
“Thunderstorm with moderate to heavy intensity rain would continue over some parts of Delhi-NCR ( Loni Dehat, Hindon AF Station, Indirapuram), Modinagar, Bagpat, Khekra (U.P.)," said the Indian Meteorological department.
In view of the incessant rain, the Indian Meteorological Department has issued a yellow warning for Delhi NCR region.
It also posted an advisory on Twitter about the possible impact of the downpour.
Partial waterlogging on some roads was also reported, including from the stretch of roads near the All India Institute of Medical Science (AIIMS).
Delhi Traffic police informed that the Traffic movement is closed at Azad market underpass(both carriageway) due to waterlogging.
Over the last two days, Delhi has been seeing heavy rainfall starting from early in the morning and continuing for hours, leading to a major waterlogging issue and heavy traffic.
According to the Met Department, Safdarjung recorded 118 mm rainfall in the last 24 hours, highest single-day precipitation in September in 19 years.
The minimum temperature settling at 23.7 degrees Celsius, the Indian Meteorological Department said here on Thursday.
The maximum temperature is likely to settle around 31 degrees,” it said.
“The relative humidity recorded at 0830 hrs was 100 per cent,” said the IMD.
Surface winds were moving towards a southeasterly with a speed of nearly 7.5 kilometers per hour,” said the IMD.