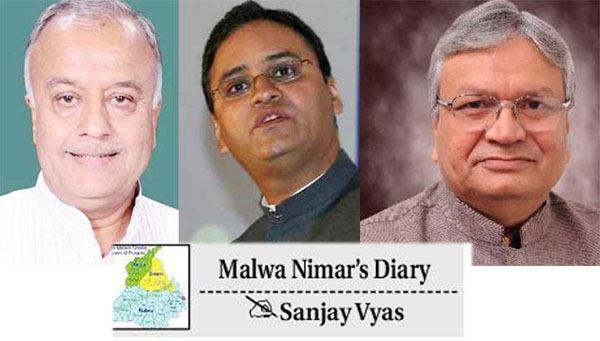 Malwa - Nimar,s Diary
Nand Kumar Singh Chauhan left Burhanpur two and a half months ago, but he did not return. His loved ones kept waiting, but his mortal remains came back. He was a simple-minded politician; he never had any connection with deceit. He was elected student union president in the school of his native village Shahpur in Burhanpur district, he learned politics and after becoming the city panchayat president in 1977, he moved forward step by step. He also held the post of BJP state president, state general secretary, but ego was far from him. Chauhan, who was popular among the activists, remained the uncontested popular leader in the Burhanpur-Khandwa region as an MLA-MP.

He continued to represent the Khandwa parliamentary constituency since 1996, except for the Lok Sabha term from 2009 to 2014. This time with supporters, he also wanted to become a minister in the central government. For a few months, his name was doing rounds for the expansion of the cabinet, but the luck didn’t favour him and his wish remained unfulfilled. He was the proletarian saint of politics, who hoisted the BJP flag in Nimar, be it children or young people or old people, all called him Nandu Bhaiyaji.
Yadav gets aggressive
As he has been neglected in the party for a long time, former Congress state president and prominent leader of Nimar zone, Arun Yadav, got an opportunity to vent his anger on the pretext of Babulal Chaurasia. Gwalior councillor and Hindu Mahasabha leader Babulal Chaurasia has been a Godse devotee, who was inducted into the Congress in the presence of former Chief Minister Kamal Nath. Arun Yadav used this as an opportunity to attack Kamal Nath.
It is noteworthy that leaders like Sajjan Singh Verma, Bala Bachchan, Umang Singhar are closer to Kamal Nath. In response to the attack on Kamal Nath, Sajjan Singh Verma has now opened the front against Yadav and the phase of attack and counter-attack is on. However, he is not the only one to raise the voice of protest in this matter. Former Chief Minister Digvijaya Singh has also raised questions, but Yadav has come on target. A direct indication of this is being seen as the emergence of factionalism in the Congress.
Suggestions of enlightened people are being taken
Preparations have been made in the BJP organization for the civic body elections likely to be held in April. After the state level meeting, meetings are going on at district and division level in Malwa-Nimar zone. Suggestions are being taken from the enlightened and senior citizens regarding the election manifesto. Their suggestions will be included in the declaration. Atul Patel, a member of the State Municipal Elections Committee and former Mayor of Burhanpur, is engaged in this task. According to him, the party will prepare a manifesto for the development of bodies in accordance with the people's aspirations.
Aslam Sher Khan also raised questions
Aslam Sher Khan, former Union Minister of State and Hockey player who came to Khandwa recently, also raised questions on Kamal Nath's policy. He said that the Congress was not following the party traditions. Kamal Nath is making a big mistake. The old Congressmen were ignored and if it continues, a new Congress may also emerge. Kamal Nath is far from ground politics. This is the reason why the Congress of Madhya Pradesh lost power. Now the party is inducting Godse supporters which is very wrong.