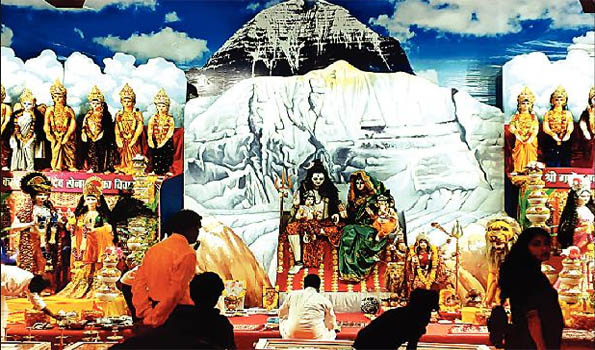 Chronicle Reporter, Bhopal
As soon as the Shardiya Navratri begins, the glory of Maa Durga Puja is visible. Mata Rani was placed in house to house. On this occasion, the main markets of the city have been beautifully decorated.
It is to be informed that due to Corona, all kinds of events were banned for the last few years. After which many events are being organized this year. This time, the theme of Maa Narmada Parikrama has been kept in the tableau in Bhopal's Bittan Market. Here 51000 liters of water have been brought from Narmadapuram to prepare the Narmada parikrama site. Apart from the idol of Maa Durga, idols of 35 deities have been kept. This time the committee has kept the theme of Mother Narmada Parikrama in the Pooja Pandal of Bittan Market.
Maa Narmada’s water is falling down on the ground from Gomukh in the form of Kapildhara. Maa Parvati and Lord Shankar have been seated in the puja pandal together with the family.
Box
Reading of Narmada Purana
Every day from 10 am, Shri Narmada Purana is being recited at the venue and Narmada aarti is also being performed. Grand Bhandara will also be organised after Dussehra in which food will be served to about 30,000 people. Thousands of devotees reached on the first day at Bittan Market. People arrived in numbers. Here the tableau has been decorated on a large scale by the Jai Maa Vaishno Durga Utsav Samiti Haat Bazar Traders Association. In the tableau, this time especially the statue of Mother Narmada was made, which is attracting people. The cost of the tableau came to more than Rs 45 lakh. Thousands of people reached here on the first day itself and visited Mata Rani.