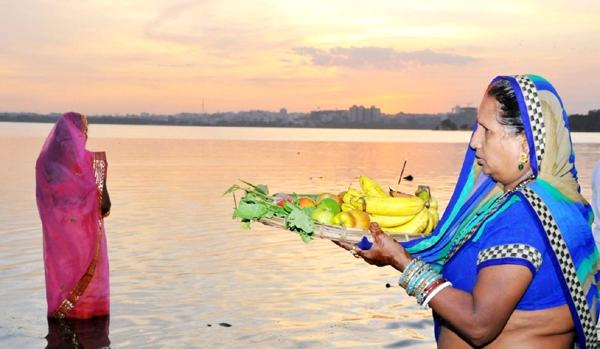 Chronicle Reporter, Bhopal, Many Bhojpuri songs were heard from the ghats and temples in the city on Friday evening on the occasion of Chhat Mahaparva of Sun worship. This festival in the capital has taken wide form in a decade. The festival would conclude on Saturday morning with the offering of Ardhya to the rising Sun. Religious faith appears to be overshadowing the fear of Corona epidemic.

Seeing the danger of infection, many people of Bhojpuri and Goswami community worshipped Chhath Maiya at home and prayed to the setting sun and prayed for happiness, prosperity and happiness of children. Some people visited the ghats and temporary water tanks constructed at different places and worshipped. The main events are being organised at Sheetal Das Ki Bagia, Vardhman Park ghat, Kali Mandir, Khatlapura, Saraswati Shishu Mandir, BHEL and Saryu Ghat in Ayodhya Nagar.

Under the auspices of Bhojpuri Ekta Manch, Puja was organised at Sheetal Das’s Bagiya and Vardhman Park Ghat. Women and their families started reaching here from 3 pm. After this, the process of worship began. Women offered fruits and dishes.

Women broke their fast with this prasad, after which the third day fast began.

They cooked puri and kheer cooked with jaggery and fruits including banana, sugarcane and lime. On the day, people performed prayers dedicated to the Sun God known as Surya Puja.