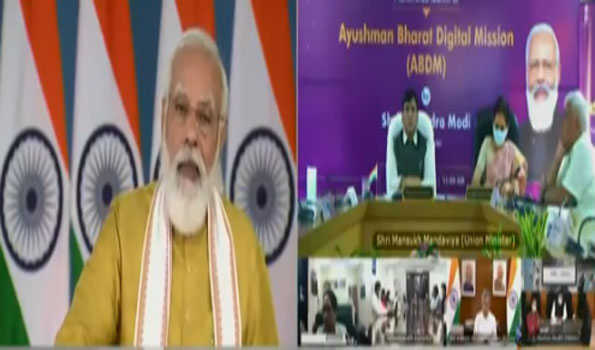 New Delhi, Sep 27 (UNI) Prime Minister Narendra Modi on Monday pushed for enhancing the use of tele-medicine, as he launched the Ayushman Bharat Digital Mission, which will help in connecting the hospitals digitally, and also provide a unique digital health ID to people, along with maintaining their health records.

He said with 130 crore Aadhaar numbers, 118 crore mobile subscribers, about 80 crore internet users, and around 43 crore Jan Dhan bank accounts, India has the biggest "connected infrastructure" anywhere in the world.

Prime Minister said that the Arogya Setu app helped a lot in preventing the spread of corona infections, and also lauded Co-WIN app for its role in making India achieve a record administration of about 90 crore vaccine doses so far.

Prime Minister Modi said that there has been an unprecedented expansion of telemedicine during the period of the Covid-19 pandemic, and so far about 125 crores remote consultations have been completed through e-Sanjeevani.

"This facility is connecting thousands of countrymen living in far-flung parts of the country every day with doctors of big hospitals of cities while sitting at home," said the Prime Minister.

He said the Ayushman Bharat-PMJAY has so far covered more than 2 crore people, who availed the facility of free treatment under this scheme. He added that half of beneficiaries are women.

Calling healthcare expenditure a major factor pushing people into poverty, the Prime Minister said, “these healthcare solutions are a big investment in the present and future of the country.”

He said the newly launched mission would connect digital health solutions of hospitals across the country, and also provide a unique health ID to people.

"Ayushman Bharat – Digital Mission, will now connect the digital health solutions of hospitals across the country with each other. The Mission will not only make the processes of hospitals simplified but also will increase ease of living. Under this, every citizen will now get a digital health ID and their health record will be digitally protected," he said.

PM Modi also stressed on a holistic and inclusive approach towards health, and said India is working on a health model that would stress on preventive healthcare and easy, affordable and accessible treatment for diseases.

Talking about the health reforms undertaken in the country, he said the numbers of doctors and para medical staff has increased over the years, and a comprehensive network of AIIMS and other modern health institutions is being established across the country.

He said work is going on for establishing at least one medical college for every three Lok Sabha constituencies. He also said the network of primary health centre and wellness centres across villages is being strengthened.

"More than 80 thousand such centres have already been operationalised," said the Prime Minister.

According to officials, Ayushman Bharat Digital Mission will create a seamless online platform by providing a wide-range of data, information and infrastructure services related to healthcare.

The key components of Ayushman Bharat Digital Mission include a health ID for every citizen that will also work as their health account, to which personal health records can be linked and viewed with the help of a mobile application.

The Mission will create interoperability within the digital health ecosystem, similar to the role played by the Unified Payments Interface in revolutionizing payments, said government officials.