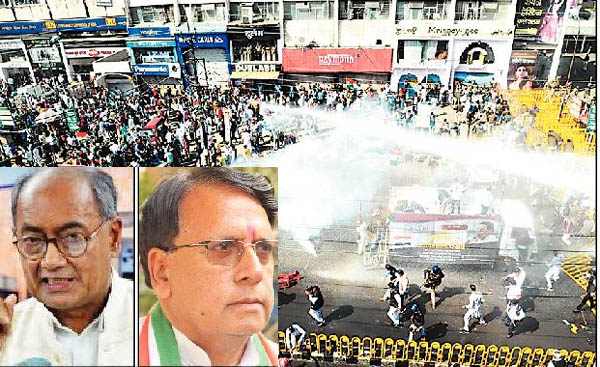 Chronicle Reporter, Bhopal-Two separate FIRs have been registered at the TT Nagar police station against 3000 Congress activists, including former ministers Digvijaya Singh, PC Sharma and Kailash Mishra, in the case of picketing, demonstrations and taking out rally in support of farmers in Bhopal on Saturday afternoon. They have been booked under six sections, including rioting and causing obstruction to government work. The first FIR is from a woman constable, while the second FIR is made by a male constable.

According to the police, the Congress workers forcibly took out a rally from Jawahar Chowk to Roshanpura and even clashed with the police without taking permission for the rally. The Congress workers remained adamant on taking out rally and holding demonstration even after the police tried to convince them several times. When the protesters were furious, the police released tear gas shells and also operated water canonns.

Even after this, when the protesters did not move, the police used force and drove everyone away. Police arrested 106 people, including former Chief Minister Digvijaya Singh, former ministers PC Sharma and Kailash Mishra and sent them to the central jail Gandhi Nagar. However, all were released on bail in the late evening. Restrictive action was taken against them under CePC 151.

The Madhya Pradesh Congress Party took out a sit-in demonstration, demonstration and rally in support of farmers on Saturday across the state including Bhopal. This rally in Bhopal was to start from Jawahar Chowk and go till Raj Bhavan. The Raj Bhavan was to be besieged here. In view of this, all the routes leading from Roshanpura towards Raj Bhavan were closed.

Most of the senior Congress leaders of the state including former Chief Minister Kamal Nath participated in this demonstration. Kamal Nath addressed the activists at Jawahar Chowk. He then left. After his departure, the protesters went out to besiege the Raj Bhavan, which was intercepted by the police. It was only after this that there was a clash between the police and the protesters.

However, CM Shivraj Singh Chouhan said, “The protest is not for farmers but for retaining the posts in MPCC. Congress leaders are more concerned about their posts than farmers.”