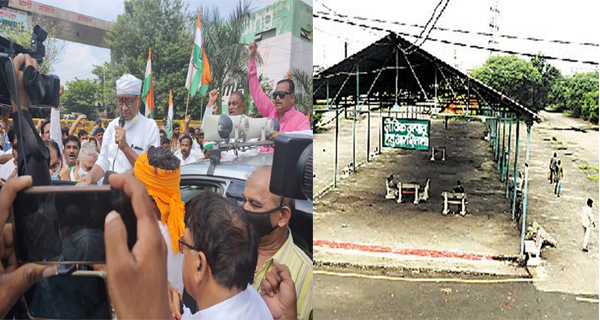 No major effect of bandh seen in MP, markets remain open
Chronicle Reporter, Bhopal
Farmers' organizations, opposing the three agricultural laws of the central government, have called a one-day Bharat Bandh on Monday. Former Chief Minister Digvijaya Singh along with farmers organizations staged a sit-in at the gate of Karond Mandi on Bharat Bandh in Bhopal. During this, the former Chief Minister, while addressing the farmers and workers, said that government did not take the opinion of the farmers before enacting the agriculture law. Even under the British rule, Gandhi could have gone to court in the agitation.
The right to go to court was taken away in the agricultural law. When the crop of farmers comes, then they start importing from abroad. These three laws are not only against the farmers but also anti-consumer. Digvijaya Singh said that I was told only yesterday that so many people could not gather here. He asked the farmers' organizations not to shy away from political parties. Along with the Congress, the farmers should also call the BJP in their agitation.
In a press conference organized after the dharna, former Chief Minister Digvijaya Singh said that if I talk about inflation, corruption, unemployment, farmers, then no one shows it. Only what the BJP wants is shown. On the question asked about the effect of Bharat Bandh, he said that the effect can be seen in Delhi, Haryana, Punjab.
The United Kisan Morcha of 40 organizations has called a Bharat Bandh across the country. All opposition parties including Congress are joining the bandh. Collector Avinash Lavania, DIG Irshad Wali along with a large number of police forces were present at the protest site. Drones were being monitored.
State President of Madhya Pradesh Bharatiya Kisan Union, Anil Yadav said that we wanted to get the market closed by peaceful demonstration, but the government, which suppressed the voice of the people, pushed the police forward. He said that the bandh has got the support of all parties including Congress. We will continue our fight. He said that the farmers' struggle has been going on for the last 11 months. We are protesting peacefully all over the country, but now the patience of the farmers is being tested. Farmers will show their strength in the upcoming elections.

No major impact of bandh
The Bharat Bandh call given by some farmer unions against the Centre's new farm laws had no major effect in Madhya Pradesh on Monday as day-to-day and commercial activities went on as normal. Road traffic was normal in the state capital Bhopal and Indore.
Peaceful demonstrations were also seen in districts like Vidisha and Satna. The Rashtriya Kisan Mazdoor Mahasangh's Indore unit president Rajkumar Patidar said the farmers wanted to stage protests at the Agriculture Produce Market Committee (APMC) premises and other places, but the district administration did not give them permission for it. The RSS-affiliated Bharatiya Kisan Sangh (BKS) did not support the bandh.