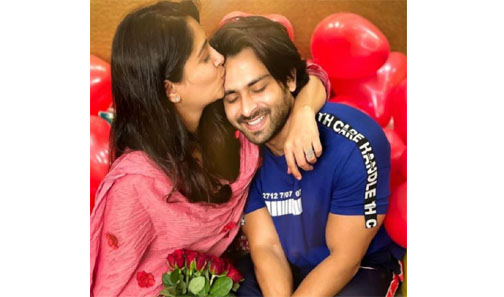 Kahaan Hum Kahaan Tum actress Dipika Kakar and her husband-actor Shoaib Ibrahim are one of the most adorable and popular couples in the television industry. The couple is head over heels in love with each other. They are popularly known as Shoaika among their fans and is also extremely active on YouTube. Dipika Kakar and Shoaib Ibrahim celebrated Valentine,s Day by sharing a beautiful and romantic picture on Instagram. Dipika also penned down a note for husband Shoaib.

In the picture, Dipika is seen kissing Shoaib on his forehead while he is feeling shy. There are cakes and red heart shaped balloons all over them. She wrote, Celebrating the day of love with the one who got love in my life... who is the reason of love existing in my life. I promise to be beside you always... to love you always... to protect you always... as you deserve nothing but the BEST!! Blessed to be your LOVE.

Dipika Kakar is seen wearing a pink coloured suit with her hair open, while Shoaib Ibrahim is seen wearing athleisure.
Recently, their song Yaar Dua, was released and the song was a huge hit. The couple received a lot of love from all the fans. On the work front, both Dipika and Shoaib have been away from television for a while. The actress last featured in the show Kahaan Hum Kahaan Tum co-starring Karan V Grover which went off the air.