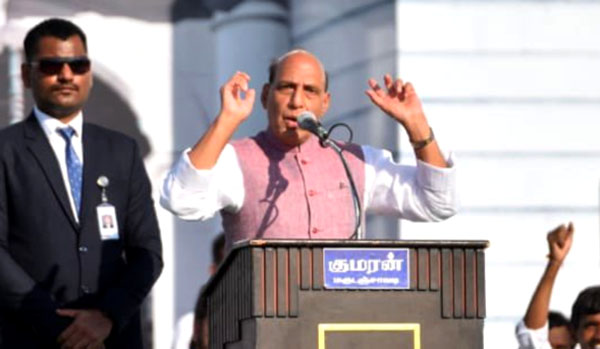 Salem, Feb 21 (UNI) Asserting that India will not allow any unilateral action on its border and will thwart any attempts at any cost as said by Prime Minister Narendra Modi, Defence Minister Rajnath Singh today said the disengagement process between the two countries on north and south banks of Pangong Tso in eastern Ladakh was complete after nine rounds of diplomatic and military level talks.

Addressing the Bharatiya Janata Yuva Morcha’s state conference here, the country will not allow any unilateral action on its border and will pay any cost to thwart such attempts. But unfortunately, the Congress doubts Indian army’s bravery. Is not insulting the soldiers who gave the supreme sacrifice in Galvan, he asked.

We have never, nor have, ever will or ever have entered into an agreement with India’s unity, territorial integrity and sovereignty. India and Indians will never let their head down under the rule of Mr.Modi, he said.

The tenth round of talks between senior commanders of Indian and Chinese army to discuss and take forward the disengagement process at friction points like Hot Springs, Gogra and Depsang in eastern Ladakh was held yesterday.

Referring to the Sri Lankan Tamils issue, he said “our government under the leadership of Prime Minister Narendra Modi was committed to ensuring that Tamil refugees in Sri Lanka live with peace, equality and dignity.

Mr.Modi has consistently tried for the empowerment of Tamil refugees in Lanka. When Modi visited Sri Lanka after becoming Prime Minister in 2015, he also visited Jaffna area and became the first Indian PM to do so. New houses were given to about 27,000 Tamil brothers and sisters who had become homeless due to the civil war, he added.