Disha Patani is like an older sister I never had, says Krishna Shroff on their strong bond 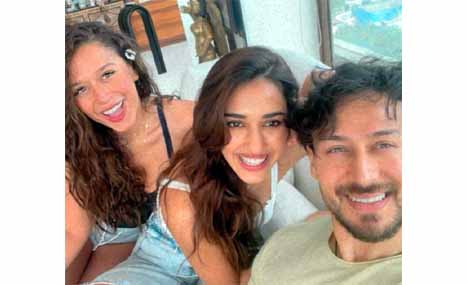 In a latest interview, Krishna Shroff got candid about her relationship with brother Tiger Shroff's rumoured girlfriend and actress Disha Patani.
Disha Patani and Tiger Shroff may shy away from making their relationship official, but the actor's sister Krishna Shroff has na qualms in opening about her strong bond with the actress. In a latest interview with Zoom, Krishna Shroff got candid about her relationship with Disha Patani and why the actress is like an "older sister" she never had.
Speaking to the portal, Krishna revealed that Disha is quite similar to Tiger. "My brother is also my best friend. We get along so well. So it just makes sense that I and Disha get along. She’s a very easy going person, she’s very simple in a world that could be complicated or change a person. She’s grounded and down to earth and very real. And I think that’s what I resonate with. Because I strive to be the same way. So I think in that sense we are very similar,” Krishna said.
She added that Disha often gives her sound advice and that is why plays the role of an older sister. "To be honest, she is like an older sister to me. I think she is a couple of months younger but I always feel like she’s older (laughs). Because I get some really sound advice from her even though she’s very much an introvert and has probably experienced a lot more in life, personally in that sense. But I will always go for advice and she’s always been there like an older sister that I have never had."
Thanks to social media, Krishna and Disha share their candid moments on the gram and it is indeed a delight for the actress' fans.