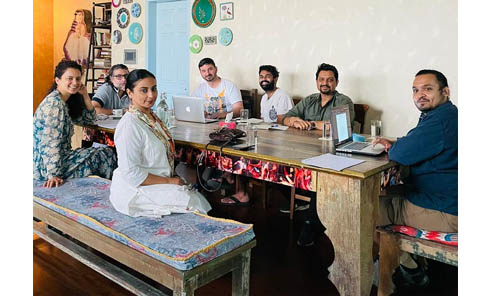 Kangana Ranaut is not less than any busy bee as the actress is investing her precious time in getting trained for her upcoming action venture Dhaakad. A few days back, the actress organized a small brunch for her Dhaakad team and Arjun Rampal who is playing a key role in the film also joined the team over party. Now, Kangana has shared an adorable snap with her teammates in her hustle bustle schedule.

Kangana Ranaut went through a six long reading session for Dhaakad and shared the snap on Twitter. In the picture, Divya Dutta who is playing a prominent role in the film also shared the space in the frame. She wrote, "Post six hours long reading session for #Dhaakad now rushing for action training as the countdown to shoot begins, lots of hustle bustle... feels like shaadi wala ghar."

Directed by Razneesh Ghai, the film has co-written the film with Chintan Gandhi and Rinish Ravindra and the screenplay has been written by Ritesh Shah. Dhaakad has been produced by Sohail Maklai productions and Asylum films, co-produced by Qyuki Digital Media. The film is expected to release in 2021 or 2022 as amid the pandemic, the film shoot has been delayed.