Docs call off strike after cancellation of cabinet meeting 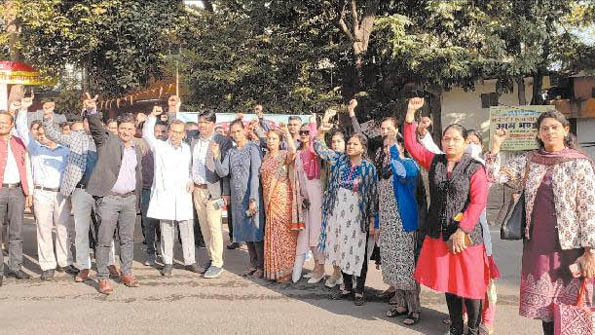 Bhopal: Even before preparations were made to appoint administrative officers as administrators in government medical colleges of Madhya Pradesh, doctors and all employee organizations started protesting. Doctors in all 13 government medical colleges of the state, including Gandhi Medical College in Bhopal, started a work stop strike on Tuesday morning. Earlier on Monday, these doctors expressed their protest by tying black bands. Patients had to face problems due to the strike. However, due to the cancellation of the cabinet meeting, the doctors also called off their strike.
Patients who came for treatment at Bhopal's Hamidia Hospital on Tuesday had to return. Patients who came in emergency had to turn to private hospitals for treatment. Due to the doctors' strike, the management of Hamidia Hospital had to postpone the operation of 20 patients for the next 8 hours. A similar situation prevailed in hospitals attached to MGM Medical College, Indore, Netaji Subhash Chandra Bose Medical College, Jabalpur, Gajraraja Medical College, Gwalior and other government medical colleges of the state.
On the other hand, the officers of the Medical Education Department are calling the strike of medical teachers ineffective. After the OPD was over, the medical teachers of GMC held a meeting with the employees organizations associated with the medical education department in front of the admin block. In this, the medical teachers said that they had written letters to the officers and asked for time to present their views together. But, nobody has time to listen to us.

Deployed 40 doctors for health and gas relief
Dr. Arvind Roy, Dean of Gandhi Medical College, said that medical teachers are on strike at Hamidia, Sultania and TB Hospitals attached to the institute. To meet the shortage of these doctors, more than 40 doctors working in the hospitals of the Health and Gas Relief Department have been put on duty in the Consultant OPD, so that treatment can be provided to all the patients coming to the Medical College Hospital.

Junior doctors also warned of strike
After medical teachers, the Junior Doctors Association has also opposed the deployment of bureaucrats for administrative and financial management in government medical colleges. The president of the association, Dr. Hridesh Dixit, has written a letter to the Medical Education Minister, demanding that the proposal for the posting of bureaucrats in medical colleges be rejected. Along with this, in the direction of passing this proposal from the cabinet, the medical teachers have been warned to join the strike from November 22 (Tuesday).