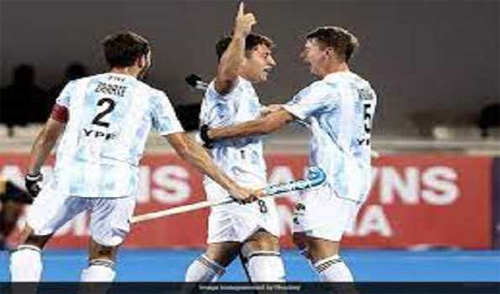 Domene’s achievement was unforgettable as in the entire match, Argentina earned three penalty corners, and all of them were punched into the goalpost, registering a cent percent conversion rate.

As expected, both teams started off by playing risk-free hockey. In the 6th minute, Germany's Masi Phandt shot on the spin but did not get his effort on target.

In the 10th minute, Argentina won their first penalty corner after great craftsmanship from Bautista Capurro's stick. A ripping drag-flick from Domene sent the ball high into the Germany net.

The Germans received a blow when Julius Hayner was yellow carded for a nasty foul which resulted in Argentina's Joaquin Toscani suffering a cut in his head. With Germany down to 10 players, Argentina capitalised taking a 1-0 lead into the break.

Ten minutes into the second quarter, Argentina had the advantage as Germany were still down due to Hayner's yellow card. However, Germany got all their 11 players back in the 23rd minute as they went close a couple of minutes ago with Siegburg's push-shot going wide of the right post.

In the 24th minute, Argentina had their second goal, and it was Domene again after a low penalty corner flick hit the backboard, leaving Argentina in total control.

Germany made a comeback by reducing the margin by one goal with just 16 seconds left in the second quarter, but Argentina defended the penalty corner.

Into the halftime, Argentina were clinical. Domene's penalty corner prowess, 2 out of 2, made the difference between the two teams.

The third quarter began as expected. Germany staged a fight back by camping on the Argentinian half, but their rivals were well organised at the back, making it difficult for the Germans to make inroads.

Germany came back into the game in the 36th minute as Hayner fired into an empty goal at the back post, with the scoreboard reading 2-1 in favour of Argentina.

After getting the goal, Germany looked rampant and focused to get an equaliser, with Argentina desperately defending. Six minutes thereafter, Argentina had the chance to score their third goal.

Francisco Ruiz received a huge overhead but fired wide of the target, despite having more time than he realised. Germany missed an equaliser in the 30th minute as Niclas Schippan's shot sailed over the Argentina crossbar. But after 17 minutes, the Germans leveled with Phandt's drag-flick flew into the roof via an Argentinian foot.

Three minutes later, Domene had his hat-trick moment, putting Argentina back in the lead.

With seven minutes of the game remaining, Germany began hunting for another goal and they did get an opportunity but Argentina's Hernando brought about a great save by diving low to his right to touch a penalty corner strike around the post.

For the next two minutes, Germany was yet again reduced to ten players after Moritz Ludwig was green carded.

Argentina's Franco Agostoni sealed the match for his team after he broke forward and fired into an open goal, sealing Germany's fate 4-2.