Don't get distracted by destructive seduction of wars : Rajnath Singh 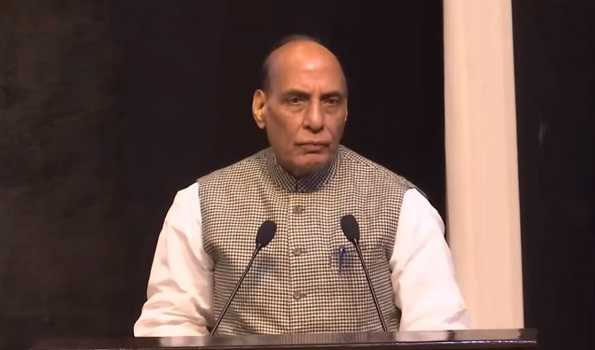 New Delhi, Nov 25 (UNI) It is essential to work together to surmount the mammoth challenges like the pandemic and climate change "without being distracted by the destructive seduction of wars and conflicts", Defence Minister Rajnath Singh said on Friday citing Prime Minister Modi's resolute message during the G-20 summit that 'the era of war is over'.

Speaking at Indo-Pacific Regional Dialogue here, he said, "In the times when humanity is facing problems like climate change, Covid-19 pandemic and widespread deprivation, it is essential that we all work together to surmount these mammoth challenges, without being distracted by the destructive seduction of wars and conflicts."

Rajnath Singh emphasised that dialogue is the only civilised mechanism for resolving disputes and disagreements and creating regional or global order.

He termed it as a moral responsibility to strive towards building a secure and just world.

"In India, our philosophers and visionaries have always dreamt of a human community, transcending political borders. We have always seen security and prosperity as a collective pursuit of entire humankind, in which there is no possibility of island security or prosperity," the Defence Minister added.

He exhorted the international community to consider security as a truly collective enterprise in order to create a global order which is beneficial to all.

"National security should not be considered as a zero-sum game. We should strive to create a win-win situation for all. We should be guided by enlightened self-interest which is sustainable and resilient to shocks," he said.

Singh said that strong and prosperous India would not be built at the cost of others, rather, he said, "We are here to help other nations realise their full potential."

"We have also been espousing the idea of multi-alignment. We believe in a multi-aligned policy, which is realized through diverse engagements with multiple stakeholders, so that views and concerns of all can be discussed and addressed for a prosperous future for all," the Minister said.

The Defence Minister said that India stands for a free, open and rules-based Indo-Pacific. As it is important for the economic development of not only the region but also the wider global community, he added.

He said that the Indo-Pacific region remains important for the economic development of not only the regional but also the wider global community. Centuries old sea lanes criss-crossing the region have helped enhance trade, Rajnath said.

"They have also functioned as arterial connections to bring about a fusion of cultures and ideas. It is these very waters that carried the message of peace, enlightenment, hope and well-being centuries ago," said Singh.

The Minister said that there is a deeper connect that allows us to share a common message of humanity across the Indo Pacific region.

Along this path of shared prosperity and security, India underlines the centrality of ASEAN in our endeavours in respect of the Indo-pacific region, he added.

The Indo-Pacific Regional Dialogue is an annual apex-level international outreach of the Indian Navy that seeks to foster exchange of ideas and promote deliberations on maritime issues relevant to the Indo-Pacific.