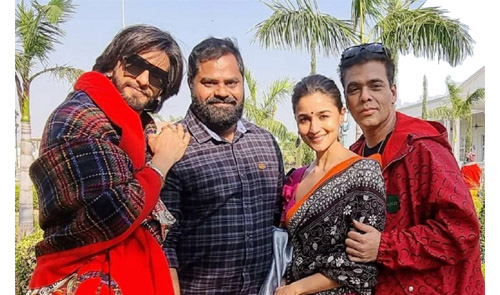 Alia Bhatt and Ranveer Singh are some of the busiest actors in the industry today. If they aren't shooting, the actors are either dubbing or attending meetings in the city. Most recently, Alia and Ranveer were in New Delhi shooting for Rocky Aur Rani Ki Prem Kahani with director Karan Johar.
How do we know that? Well, a brand new photo of the trio from the film's sets seems to have emerged. In the picture, Ranveer, Alia and Karan can be seen flashing their widest smiles with astrologer Balu Munnangi. The image was shared by Munnangi on his official Instagram account who captioned it, "Vibrant vibrations on the sets of Rocky Aur Rani ki Prem Kahaani @karanjohar @ranveersingh @aliaabhatt @dharmamovies."
Turns out, after enlisting Munnangi's astrology services for the success of Shershaah, Karan Johar seems to be taking his help once more to ensure the romantic comedy with Alia and Ranveer goes obstacle-free. Other Bollywood actors like Ajay Devgn and Sanjay Dutt have also enlisted Munnangi's astrology services in the past. Looks like he is guiding Dharma's all upcoming films.
In the picture, Alia can be seen decked up in her character look. For the unversed, the actress will be seen donning a saree along with a bindi look. Ranveer, on the other hand, can be seen bundled up in a shawl to keep himself warm from the north Indian winters.