Don't require certification from others: India slams criticism of its human rights record 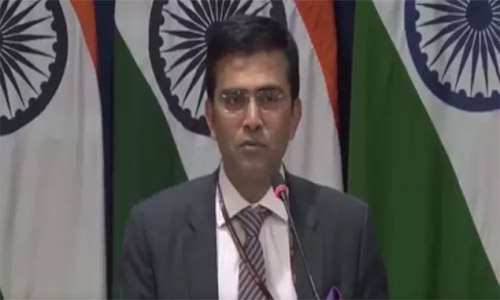 New Delhi, Jan 28 (UNI) India on Friday slammed criticism of its human rights situation by four US lawmakers and former President Hamid Ansari at an online event, saying that India is a robust and vibrant democracy and it does not require certification from others. Ministry of External Affairs spokesperson Arindam Bagchi, at a media briefing, also said that the track record of the organisers of the event, the Indian American Muslim Council, “is as well known as the biases and political interests of the participants”. “We have seen reports on this event. India is a robust and vibrant democracy, it does not require certification from others. “The claim that others need to protect our constitution is presumptuous and preposterous. “The track record of the event organisers is as well-known as the biases and political interests of the participants,” he said, in sharp comments. Ansari, a former career diplomat who served two consecutive terms as the vice-president, while participating in a virtual panel discussion organised by the Indian American Muslim Council (IAMC), expressed concern regarding the rise of Hindu nationalism, saying: "In recent years, we have experienced the emergence of trends and practices that dispute the well-established principle of civic nationalism and interpose a new and imaginary practice of cultural nationalism." Four US lawmakers Democratic Senator Ed Markey, who is known for his anti-India stand, including opposing the landmark India-US civil nuclear deal, and Jim McGovern, Andy Levin and Jamie Raskin, who have been traditionally anti-Indian, spoke at the event, criticising India. Markey said at the event: "As the Indian government continues to target the practices of minority faiths, it creates an atmosphere where discrimination and violence can take root. In recent years, we have seen an uptick in online hate speeches and acts of hate, including vandalised mosques, torched churches, and communal violence." Union Minority Affairs Minister Mukhtar Abbas Naqvi has hit out at the former Vice President over his "cultural nationalism" remarks. Naqvi said the event attended by Hamid Ansari on Republic Day was organised by a group that had "links with SIMI (Students' Islamic Movement of India) and ISI (Inter-Services Intelligence)" of the Pakistan Army. "Some people are becoming a part of anti-India conspiracy of Pakistan sponsored organisations. These organisations are conspiring to create confusion over India's culture and inclusivity". "These people are becoming a “partner in Pakistan's propaganda” to defame India, he said. Naqvi said that the country feels that some people and organisations have taken a contract to tarnish India's culture, nationalism and its ethos of unity in diversity. "The mindset of Modi-bashing is now changed to Bharat-bashing", he said.