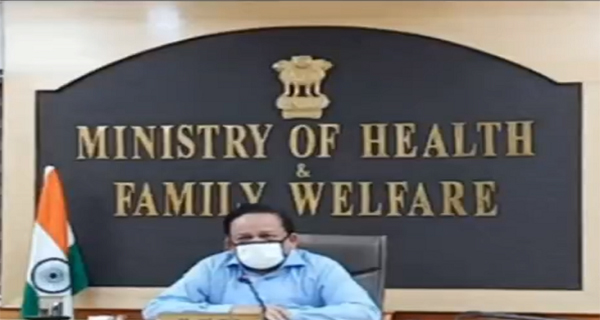 Union Health minister Harsh Vardhan on Thursday said the doubling rate of Coronavirus is 11.3 days in the country and although global mortality rate was around 7 per cent, India has a mortality rate of around three per cent and around 86 per cent of fatalities of persons with co-morbidity.

He also informed that 288 government laboratories were working along with 97 private lab chains with around 16,000 sample collection centres and testing around 60,000 tests per day. The Government was working to increase the testing capacity to 1 lakh tests a day within next few days, he added.
The Health Minister further said that since the development of a vaccine was going to take a longer time, Lockdown and Social Distancing were serving as "effective social vaccine."

“The Ministry of Science & Technology, under my charge, has also been working on innovations and has been funding certain projects which are going to make the testing procedure quite fast," he said.

Along with the states/UTs and the dedicated stakeholders and partners, India shall be able to emerge victorious in combating COVID-19, he assured the Lions Club International members across the country and commended their contributions over the years in campaigns such as polio and cataract. He exhorted them to again collectively support the Government’s efforts in the COVID-19 fight.

“We all have to rise to the occasion to work together to defeat COVID-19 which has spread across more than 200 countries in the world," he said.

He also commended them for providing meals to millions, and much needed medical equipment and protective gears to many, an official release here said.