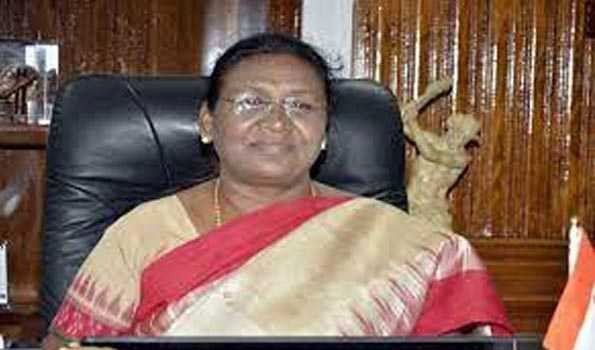 Bhubaneswar, June 23 (UNI) BJP-led NDA candidate for the coming Presidential Election, Draupadi Murmu left for Delhi on Thursday morning amid tight security to file her nomination papers on June 24 next.

Murmu reached the Biju Patnaik International Airport from the MCL guest house where she had been staying since Wednesday.

A large number of her supporters, BJP leaders, party activists and well-wishers were present at the Airport to greet and see her off.

She was given a grand and rousing send-off at the Airport. Traditional tribal folk dances were performed at the Airport in her honour.

Before leaving for Delhi Murmu thanked all for their support and sought the cooperation of one and all.

BJP had announced the name of former Jharkhand Governor and former Odisha Minister for the top Constitutional post in the country on Tuesday.

Odisha Chief Minister and BJD Supremo Naveen Patnaik had already announced his support for Murmu and appealed to all MLAs of the state, cutting across party lines to vote for her and ensure her victory.

After reaching Delhi Murmu is scheduled to stay in Odisha Bhawan till she files her nomination.

If nominated she will be the first tribal woman in the country and the first woman from Odisha to occupy the coveted post.