Efforts in financial and public asset management in MP commendable 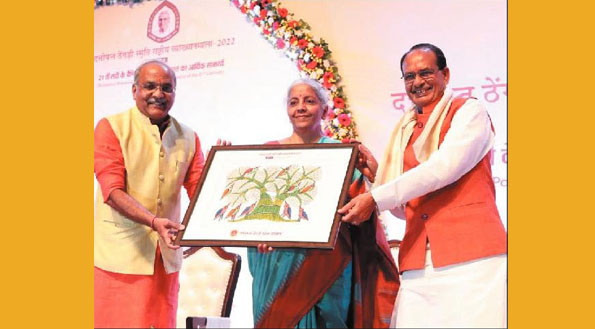 Chronicle Reporter, Bhopal
Union Finance Minister Nirmala Sitharaman has said that the efforts being made in the field of Financial and Public Asset Management (PAM) in Madhya Pradesh are commendable. The growth rate of GSDP of the state has been higher than the national GDP growth rate in the last 10 years. In the year 2021-22, the economic growth rate of Madhya Pradesh was 19.74 percent, which is the highest in the country. Madhya Pradesh's efforts towards fulfilling the target set by the Prime Minister Shri Narendra Modi to make the country's economy 5 trillion dollars by the year 2025 are commendable.
Sitharaman said this after watching the presentation by the Finance Department at Mantralaya today. CM Shivraj Singh Chouhan, Finance Minister Jagdish Deora, Chief Secretary Shri Iqbal Singh Bains and officials of Finance Department were present.
The Union Finance Minister said that Madhya Pradesh is making progress in every field. Especially in the matter of financial management, the state has presented exemplary examples by making many innovations. She said that the beneficiaries are being benefited by speeding up various schemes of the Central Government in the state. Along with this, self-employment efforts are also getting better, due to which startups are being encouraged. The Union Minister said that Madhya Pradesh is making its best contribution for self-reliant India.

Economic strategies for overall development
CM Chouhan said that under the leadership of Prime Minister Shri Narendra Modi, the state government is making special efforts to increase GSDP. In the report presented by the state level task force constituted for this, a target has been set for the contribution of the state to the country's economy of $ 550 billion by the year 2025-26. The Chief Minister said that according to the recommendations of the Madhya Pradesh Government GSDP Task Force, economic strategies have been prepared for the economic and overall development of the state to achieve the target.

State got an additional revenue
Chouhan said that due to the implementation of the new excise policy this year, an increase of about 25 percent in excise revenue is possible. Reversal of ITC of ineligible IGST was done by the Data Analysis Unit of the Commercial Tax Department, as a result of which the state got an additional revenue of Rs 694 crore in the month of October. In the special campaign to increase the tax base of GST, 69 thousand 894 new registrations have been done during the period from January to October 2022, which is 24 percent more than the same period last year.