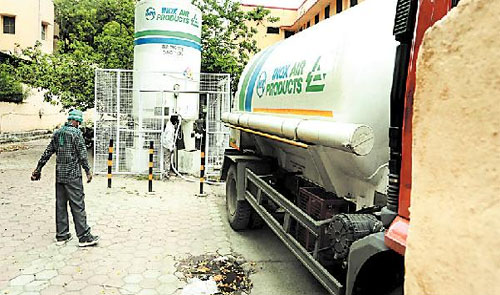 Chronicle Reporter, Bhopal
Efforts are on to increase local arrangements in the state along with the supply of oxygen from the Central government. On May 2, a total of 446.8 metric tonnes of oxygen was supplied from external sources in the state. Today, the state is expected to get supply of 484 MT of oxygen from external sources. Apart from this, the work of setting up a large scale oxygen plant in the state is also going on a war footing.
Chief Minister Shri Chouhan said that 2000 oxygen concentrators have been purchased by the state government to smoothen the supply of oxygen. Besides, about 2 thousand oxygen concentrators have been installed through the local arrangements. The latest VPSA technology based oxygen plants are being set up at Bhopal, Rewa, Indore, Gwalior and Shahdol district hospitals in the state at a cost of Rs one crore 60 lakh. Madhya Pradesh is the first state in the country to set up oxygen plants using this latest technology. The oxygen produced from these plants will be available for 50 beds.
Chief Minister Shri Chouhan said that instructions have been issued to provide special financial assistance package for new investments to increase oxygen production capacity. Under this, the maximum investment assistance will be payable up to 75 crores mainly on the capital investment made in plant, machinery and buildings and at a flat rate of 50 percent. In addition, concessions have also been given in electricity tariffs.
Onsite oxygen gas generator plants operating on the basis of new debel technology have been developed at the hospital itself by DRDO, the Ministry of Defense. On-site oxygen gas generator plants with a capacity of 570 liters per minute are being set up in 8 districts of the state, Balaghat, Dhar, Damoh, Jabalpur, Barwani, Shahdol, Satna and Mandsaur, costing more than Rs 5 crore 87 lakh. Along with this, 8 oxygen plants based on PSA technology have been approved in 8 districts out of which 7 plants have started functioning. For 37 districts of the state, the state government is setting up new oxygen plants prepared with PSA technology in district hospitals with its own budget. The work of laying the pipeline to convert the beds of government hospitals in the state to oxygen beds is also continuing on a war footing.

Vaccination
So far, health workers, frontline workers, senior citizens and more than 81 lakh 38 thousand people above 45 years of age have been vaccinated. More than 3 crore 22 lakh citizens of the state will get vaccinated. The state government will spend about Rs 2,710 crore on this work. The work orders of 45 thousand doses of the Covishield vaccine have been issued.