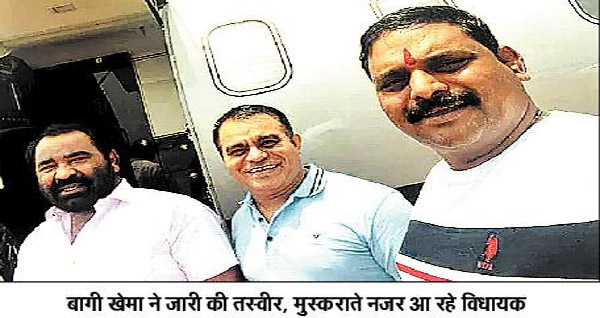 Guwahati, June 24 (UNI) Shiv Sena rebel Eknath Shinde has claimed support of the 41 MLAs by releasing the photographs and videos after the party wrote a letter to Maharashtra Assembly speaker seeking the disqualification of 12 MLAs.

Taking to Twitter, Shinde, who along with party MLAs camping in Assam, wrote, "You cannot scare us by giving the names of 12 MLAs for disqualification because we are followers of the Shiv Sena chief Bal Thackeray. We know the law, so we do not pay heed to threats."

The political crisis for the Shiv Sena-led Maha Vikas Aghadi (MVA) government in Maharashtra deepened further after state minister Eknath Shinde released videos and photographs claiming that he enjoys the support of 41 MLAs.

According to a source, the number of dissident MLAs camping at the luxury Radisson Blu hotel here rose to 44, including Independents and others.

The rebel MLAs released videos and photographs claiming the backing of over 40 MLAs, posing an existential threat to the Uddhav Thackeray-led coalition government in Maharashtra.

According to the videos and photographs, released by the disgruntled MLAs, Shinde is seen in the hotel posing with MLAs.

As a huge contingent of Assam police personnel led by senior officers have encircled the resort, allowing no journalist to come within 200 metre radius of the hotel.

The BJP leaders in the state and the hotel staff are tight-lipped about what's goin on inside.

A source close to the rebel Sena MLAs said that two to three more dissident MLAs reached the Guwahati hotel on Thursday..