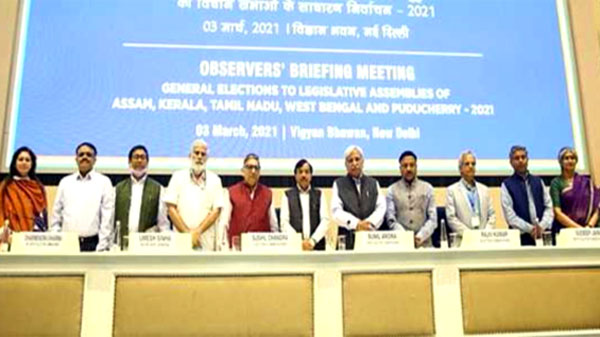 New Delhi, Mar 3 (UNI) The Election Commission of India (ECI) on Wednesday briefed Observers for the Election to the Legislative Assemblies of Assam, Kerala, Puducherry, Tamil Nadu and West Bengal scheduled for March 27 to April 29.

More than 1650 Observers attended the briefing session physically and virtually from more than 120 locations.

Officers from IAS, IPS, IRS and other Central Services will be deployed as General, Police and Expenditure Observers.

Chief Election Commissioner Sunil Arora told the Observers that they are one of the most important torchbearers of Indian democracy.

Mr Arora recalled that during his tenure in ECI, since September 2017, he has been associated with 14 Assembly Elections and the 2019 Lok Sabha Elections wherein Observers, he said, played an important role in the conduct of elections.

Mr Arora said successful conduct of elections is always a combined feat of field officers and ECI where the Observers and Special Observers play a vital role. He added that, during these elections, Observers will have additional role in randomization of forces and their deployment.

The CEC said the resilience of Indian democracy lies in the fact that the Common Man plays a decisive role in Government formation.

The motto of ECI is to ensure empowered, vigilant, well informed and safe voter.

He reminded the Observers that they should be visible and accessible to citizens and enable them to vote fearlessly. He told the observers that ECI will act swiftly and ruthlessly in case anyone is found to be lax in performing their duties.

ECI will not tolerate any willful lapses, he reiterated.

Mr Arora asked the Observers to visit the Polling Booths to check due facilitation to senior citizens, persons with disabilities and women voters to ensure the Commission's commitment to principle of Inclusive Elections.

For these ensuing elections, ECI has extended the option of Postal Ballot facility to the electors who are marked as Persons with Disabilities (PwD), electors above the age of 80 years, electors employed in notified Essential services and electors who are COVID- 19 positive/suspect as certified by competent authority and are in quarantine (home/institutional).

He said the Bihar Assembly elections have literally become a turning point in the history of Indian elections, as they were held amid the coronavirus pandemic. Even the participation of voters was better than the previous Assembly and Parliamentary elections in Bihar.

The Commission's broad Guidelines for COVID-safe election to be adhered to during the entire process.