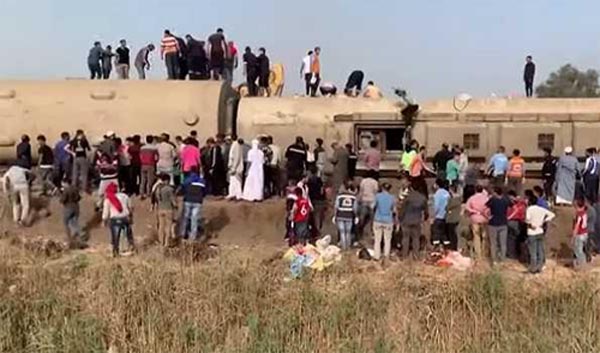 Cairo, Apr 19 (UNI) A total of 11 people were killed and 98 others were injured after a train got derailed in northern Egypt, the country's Health Ministry said.
The incident occurred on Sunday and earlier in the day, Al Arabiya broadcaster reported that eight people died in the incident that occurred in the Qalyubia governorate, north of Cairo, when a train got derailed on its way from the city of Mansoura to the country's capital.
"The Health Ministry has announced that 11 people were killed and 98 were injured as a result of the (Cairo-Mansoura) train derailment," the statement said.
According to the Egyptian railway authority, four cars got derailed and overturned.
This is the third railway incident that occurred in Egypt in recent weeks. Earlier this week, at least 15 people were injured as a result of a passenger train derailment in the northern Egyptian province of Sharqia. Last month, two trains collided in Egypt's southern Sohag province, leaving 19 people dead and 185 more injured.