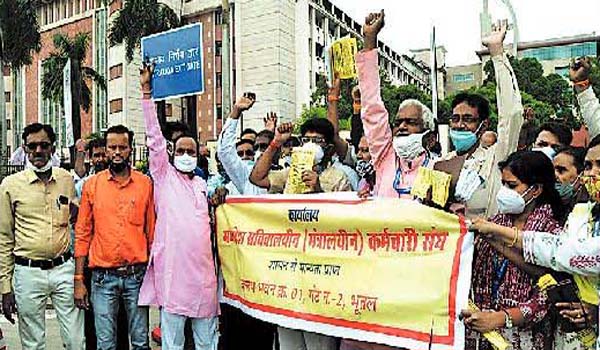 Bhopal, --After increasing the dearness allowance of central employees from 17% to 28% by the central government, many state governments have faced difficulties. In Madhya Pradesh too, government employees have also opened a front for many demands including increasing the DA. The leaders of the Mantralaya Karmchari Sangh came out of the Vallabh Bhawan building in a procession and started raising slogans regarding their demands. Sudhir Nayak, president of Sangh, alleged that the employees union had spoken to the government and officials regarding their demands, but when they were not resolved, they were forced to protest. At the same time, the employees union has warned that if their demands are not accepted, then this demonstration will be intensified in the coming days.
Recently, the Modi government's dearness allowance has been increased from 17% to 28%. From July 1, 2021, the benefit of dearness allowance will be available to 48 lakh 34 thousand central employees and 65 lakh 26 thousand pensioners of the country. At the same time, more than 14 lakh employees of Madhya Pradesh have not been given the benefit of salary increase and dearness allowance for 2 years, In such a situation, resentment among the employees has also started increasing. Due to this, today the employees of the ministry have stopped work and have gone on strike and are protesting against their demands. He has also submitted a memorandum to the collector in the name of Chief Minister Shivraj Singh Chouhan, in which 5 other demands have been made including increasing the DA. He has warned of agitation in future if the same demands are not fulfilled.

Give arrears, increment and promotion at par with Centre
The employees are demanding that arrears, increment and promotion should be given at par with the Centre. The employees have demanded from the MP government that their dearness allowance should be increased at the level of the Centre, long-stayed salary increase should be given and the promotion of government employees has also been stalled for a long time, so all the employees should also get promotion. Employees Union It is said that the DA of government employees has not been increased for a long time, while the price of petrol has gone up to Rs 110 a liter, in such a situation, giving transport allowance of Rs 200 a month is a joke. Here, in view of the increasing displeasure of the employees, the Shivraj government Preparations are also in full swing at the ministry level for which employees can be given 2 increments before the monsoon season. This will lead to an additional burden of about 80 crores annually.