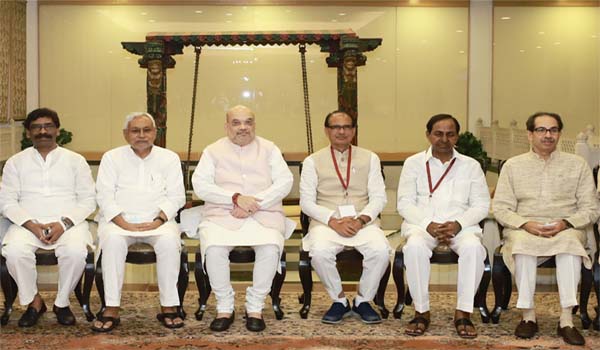 Chronicle Reporter, Bhopal
A review meeting on Left Wing Extremism was held in New Delhi under the chairmanship of Union Home and Cooperative Minister Shri Amit Shah. In the meeting, all the states affected by Naxalism expressed their commitment towards development in the Naxal affected areas. Madhya Pradesh Chief Minister Shri Shivraj Singh Chouhan gave information in the meeting about the efforts being made to control the naxal affected areas in Madhya Pradesh. Chief Minister Shri Chouhan informed that in the year 2020-21, Rs 802 crore was paid by providing employment to 12 lakh workers in Naxal affected districts. In the last 5 years, infrastructure construction works worth Rs 375 crore have been done in the Naxal affected areas. Apart from this, Naxalites carrying rewards have been killed in the encounters and arrests have also been made.
The meeting was attended by the Chief Ministers of Bihar, Odisha, Maharashtra, Telangana, Madhya Pradesh and Jharkhand and the Home Ministers of Andhra Pradesh.

Continuity of development works in the affected areas: Chouhan apprised in the meeting that apart from taking armed action to control Naxalism in the Naxal-affected districts of the state, continuous developmental works are being done. Employment is being provided to the people in the area under MGNREGA on a large scale. Chief Minister Shri Chouhan informed that in the Naxal-affected districts, in the one year period of 2020-21 alone, Rs.802 crore 57 lakh has been paid while providing employment to 12 lakh MGNREGA workers.

Economic empowerment of tribes continues: Chouhan informed that development works are being done continuously for the economic empowerment of tribals in Madhya Pradesh along with armed action. The government has passed the Scheduled Tribe Debt Release Act-2020, due to which the loans given against the rules to the tribals living in the scheduled areas have been automatically waived. The work of implementing PESA law in a phased manner is being started in the state. State rules will be amended in the direction of empowering "Village Nyayalayas".

Focus on availability of employment: Chouhan informed that 23113 women self-help groups have been formed in Balaghat, Mandla and Dindori districts, from which 2 lakh 74 thousand families have been connected. These groups are also working in non-agriculture sector along with advanced farming, marketing of animal husbandry products. As a result of the industry friendly policy of the state, 10 thousand 341 persons have got employment since April 1, 2020, through employment fairs and self-employment schemes in Balaghat, Mandla and Dindori.
Chouhan told in the meeting that the joint action of the police forces of the three states has yielded good results in the tri-junction.