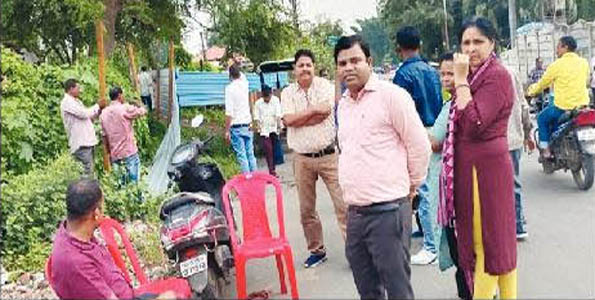 Chronicle Reporter, Sehore
The land mafia made every effort to grab the land given by the Canadian Mission to the Christian families about ninety years ago. They had also encroached on the land worth crores of rupees by threatening the families living there, but the administration has strictly removed the encroachment made by the land mafia on Tuesday.
For the past few days, the land of the Mission Compound in front of the Superintendent of Police Office was under discussion. It is nearly five and a half acres of land, which if valued in today's market price becomes in crores of rupees. In the past, some people had occupied this land, expressing ownership.
15 families living for several decades- The high prized land of the Mission Compound located in front of the Superintendent of Police Office is told that in 1933, 5. 51 acres of land was given to Christian families by Razor Kandil of the Church of Canadian Mission. Since then, the occupation of the members of those families has been running on this land.
In the middle, some people had made a power of attorney in a planned manner to grab this land worth crores of rupees. Walter, an elderly member of the Christian family, says that he had taken refuge in the court and won in this case. Walter says that the so -called land mafia illegally made the agreement of the plots of the land there. After this, they were threatening all the Christian families.

Canadian Mission to the Christian families