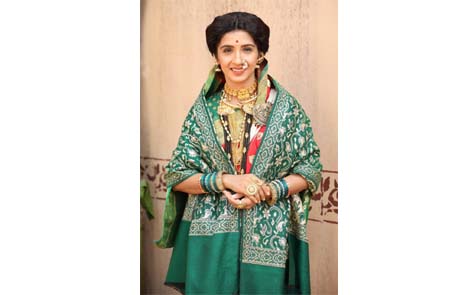 Sony Entertainment Television’s historical show ‘Punyashlok Ahilyabai’ is based on the honorable life of Queen Ahilyabai Holkar, who with the support of her father-in-law Malhar Rao Holkar, challenged the pre-defined societal norms and made positive contributions for the welfare of the people, particularly women.
The show depicts how Ahilya from a young age was an extra-ordinary girl who dared to dream and questioned the unjust rules of the society. In the current track, an eager to learn Ahilya is seen receiving a formal education with the unconditional and wavering support of her father-in-law. Eventually her husband ‘Khanderao’ and mother-in-law ‘Gautamabai’ also come forward and show their support as she fulfils her dream.
Renowned actress Snehalta Vasaikar who essays the role of Gautamabai i.e ‘Ahilya’s mother-in-law’ is known for her prolific performances on-screen, and many even believe that nobody could have played Gautamabai’s character better than her. Having done so many historical shows, the actress believes that playing historical characters come with a sense of responsibility.
Sharing more on the same, actress Snehalta Vasaikar said, “When essaying historical characters, we have to ensure that we live up to their legacy. It’s not just about offering a visual spectacle through our on-screen portrayal but also do it with conviction so that there is learning and a impactful take away for the audience. Essaying historical characters has multiple layers to it and it is upon us as actors to leave no stone unturned and just give our absolute best to our audience.”