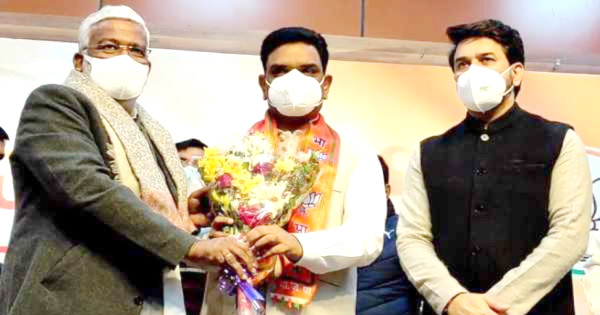 Welcoming the former cop into the party fold, Anurag Singh Thakur said it is a big thing that such a talented officer is sacrifing his lucrative career and joining politics to serve the people.

"Mr Arun's vast experience will held the state in controlling law and in order and other administrative issues," he said.

UP BJP president Swantra Deo Singh said that Mr Arun is a honest officer and his contribution in the party wil certainly strengthen the party.

Mr Arun in his address said that ,"I am happy to join the largest party of the world and will work with keaders like PM Narendra Modi and UP CM Yogi Adityanath."

"I had left the IPS and took VRS in order to serve the people and nation. I also promise to give my 100 per cent in politics," he added.

Talking about the law and irder situation in the state, former top cop said ,"never in the past, there was such a conducive atmosphere in controlling crime and criminals and police was given a free hand. Rule of law prevailed in the Yogi Adityanath regime leading to develoonent in all the sectors."

On the occassion he also remembered, Dr BR Ambedkar, saying that due to his efforts Dalits and backwards were getting their rights.

Mr Asim Arun, a 1994 batch IPS of ADG rank officer, had sought VRS on January 8, the day election dates were announced and his approval came within a week.

Asim Arun, 51, is the son of late Shreeram Arun, former DGP of UP and his native place is Kannauj.

As per the information, Mr Arun could be fielded by BJP from Kannauj sadar assembly seat during the Vidhan Sabha elections.