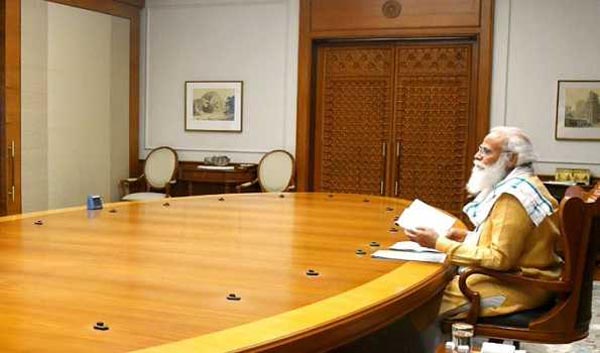 New Delhi, Apr 18 (UNI) Prime Minister Narendra Modi on Sunday said the expansion and modernisation of medical infrastructure in Varanasi in the last 5-6 years has helped in fighting Covid-19.
Mr Modi reviewed the status of Covid-19 in Varanasi district through videoconferencing.
During the meeting, the Prime Minister took stock of testing, availability of beds, medicines, vaccines and manpower etc for prevention of Corona and proper treatment of Corona infected patients.
He directed the officers to provide all possible assistance to the public expeditiously.
During the discussion, the Prime Minister emphasised that everybody should follow the "distance of two yards and mask is essential".
Stressing the importance of the vaccination campaign, the Prime Minister said that the administration should make everyone above the age of 45 aware of this.
He also asked the administration to extend all possible assistance to the people of Varanasi with utmost sensitivity.
The Prime Minister thanked all the doctors and medical staff of the country and said that even in this hour of crisis, they are doing their duty sincerely.
'We have to learn from last year's experiences and move forward cautiously,' he said.
The Prime Minister said that as a representative of Varanasi, he is also taking constant feedback from the general public.
The Prime Minister also emphasised the need to increase efforts at all levels in view of the stress due to the increased number of patients.
He said that the Varanasi administration should step up the pace of work in all the fields in the same way it has rapidly set up the 'Kashi Covid Response Centre'.
The Prime Minister emphasised on "Test, Track and Treat" and said that like the first wave, the same strategy has to be adopted to win over viruses.
He also emphasised on providing contract tracing and test reports of infected persons at the earliest.
The Prime Minister also directed the administration to discharge all responsibilities towards the patients and their families living in home isolation in a sensitive manner.
The Prime Minister praised the voluntary organisations of Varanasi for working closely with the Government and said they should be further encouraged.
He again emphasised on greater vigilance and caution in view of the situation.
The public representatives and officials of Varanasi region informed the Prime Minister about the preparations for prevention and treatment of Covid, through video conferencing.
In this regard, the Prime Minister was briefed on the issues of control rooms set up for contact tracing,command and control centres set up for home isolation, dedicated phone line ambulances, provision of telemedicine from control rooms, deployment of additional rapid response teams in urban areas etc.
The Prime Minister was informed that so far 19,8,383 persons have received the first dose and 35,014 persons have received both the doses of vaccination to prevent Covid.