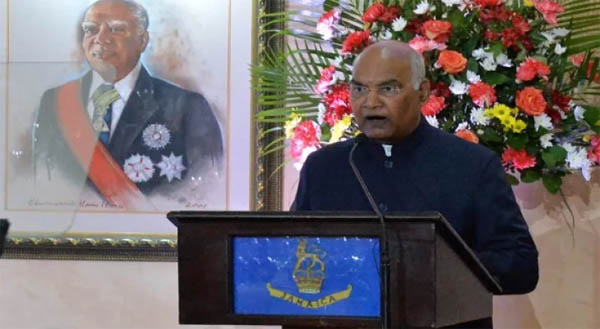 Kingston/New Delhi, May 18 (UNI) Facing a shortage of skilled labour, Jamaica welcomed India's offer to partner with the Caribbean nation and share its technical skills, knowledge and expertise, made during President Ram Nath Kovind's address to the Jamaican parliament. Jamaica has been concerned over the shortage in skilled labour for its construction industry, its tourism and hospitality sector and even Business Process Outsourcing industry, and has been mulling importing skilled labour. President Kovind's address to a special joint sitting of the Jamaican Parliament on Tuesday was welcomed with loud thumping of desks. Referring to Jamaica's youth potential, the President said: “Jamaica's strategic position in the vicinity of some of the largest global economies and its talented pool of English speaking youth provide it with an excellent opportunity to become a knowledge highway and benefit from the fourth industrial revolution. “India shares Jamaica's Vision 2030 goals of empowering its people and ensuring a secure, cohesive and just society by becoming a prosperous and sustainable economy. “India is ready to partner with Jamaica and share its technical skills, knowledge and expertise, which could transform Jamaica's education and businesses,” he said, with the statement being welcomed with loud thumping of desks by lawmakers. “Top Jamaican businesses already source software and take back home technical support from technology companies based in India. India and Jamaica are already cooperating under the International Solar Alliance for reducing the carbon footprint. There is also great potential for partnering in the railways and the agricultural sectors which are among India's strengths,” he said. Praising Jamaica's sporting skills, he added: “For a country with less than three million people, it is amazing to see Jamaica's dominance in athletics at the Olympics, World Championships and other premium sporting events.” There was loud applause at this. Then with a pause, the President added, “Sometimes we feel jealous of you!” – evoking laughter from the benches. “You will find India turning to you to learn the lessons in sports and athletics. In music and entertainment, cross pollination will enrich the entertainment industries of both countries and also in hospitality and tourism there is great scope for cooperation and mutual learning.” Last month, Jamaican Prime Minister Andrew Holness warned that the Caribbean nation would have to import skilled labour to fill in the gaps in the country, especially in the construction industry. There have been calls for the country's national skills training institution, the HEART Trust/NSTA to ramp up the training of its nationals. According to data, about two-thirds of those able-bodied 25-55 year olds are without any school certification in Jamaica. According to a 2020 report, HEART has not been able to get decent returns for the money it spends on training. Over five years, up to the 2018-19 fiscal year, the agency shelled out Jamaican $30.5 billion (of which 27 per cent, or $8.3 billion, went to external partners) for programmes that should have “graduated” more than 232,000 people with skills at various levels. However, less than half (45 per cent) of the enrolled students actually “graduated”. President Kovind also noted that under the New Education Policy India was planning to start new Indian Institutes of Technology abroad. “I am happy that Jamaica is one of the first countries to express interest in hosting an Indian Institute of Technology,” he said to applause. He also said that the NEP has opened up possibilities of foreign students gaining admission in top specialized Indian universities. “Jamaican students should take advantage of this opportunity by studying at some of the best institutions, respected globally and charging only a fraction of the cost compared to Western institutions,” he said.