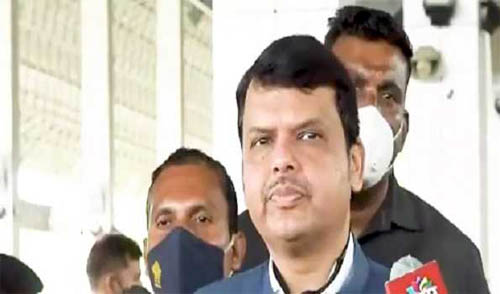 Nagpur, Apr 8(UNI) Senior BJP leader and Leader of opposition(LoP)in Maharashtra Assembly Devendra Fadnavis on Thursday demanded a CBI probe into charges levelled by suspended cop Sachin Waze against Shiv Sena Minister Anil Parab.
Fadnavis termed the charges very serious and said "Let the truth come out".
The suspended and arrested cop Sachin Waze had on Wednesday claimed that the Shiv Sena Minister Anil Parab asked him to collect money from contractors.
In a letter , Waze tried to submit before a NIA court, he claimed that the Transport Minister Parab asked him to look into an inquiry against fraudulent contractors listed in the BMC and collect at least Rs 2 crore from about 50 such contractors.
The said inquiry was based on an anonymous complaint, Waze added.
In the same letter, Waze claimed that former Maharashtra Home Minister Anil Deshmukh had demanded Rs 2 crore from him to continue his service in the Mumbai police.
Fadnavis, while speaking to the media at Nagpur Airport , said that the letter written by Waze mentioned Rs 2 crore and Rs 50 crore. “The contents of the letter are serious. Whatever is happening in Maharashtra is not good for the image of the State and police.
The High Court has ordered a CBI probe into former Mumbai Police Commissioner Param Bir Singh’s charges.
"The CBI should also investigate Waze’s charges for the truth to come out. Otherwise, the image of state police will be permanently damaged,” the former CM said.