Family will get Adhikar Patra in abduction cases 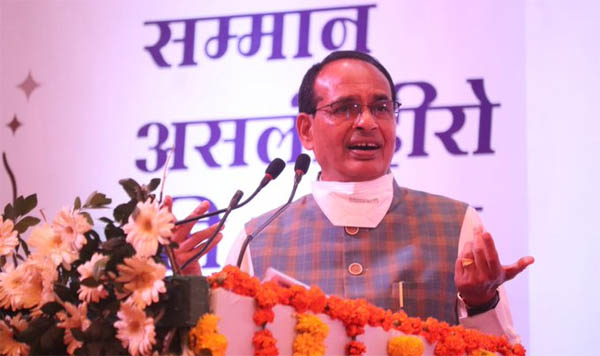 Chronicle Reporter, Bhopal -Chief Minister Shivraj Singh Chouhan has said that the work of controlling criminals in Madhya Pradesh will be done with full force. Common people will be made aware of the rule of law. There is decline by 15 to 50 percent in different types of crime due to strict action being taken against the criminals in the last 08 months. Those involved in crimes related to girls and women are demons. They should not be spared under any circumstances. Rapists should be hanged. A detailed review has been conducted in connection with missing girls in the state. Action will be taken for the rescue of the kidnapped child as per the checklist. A record letter containing detailed description of the investigation being done by the police will be given to the family. The authority letter will comprise the information of what action has been taken in how many days. In this arrangement, the family of the abducted child will have a meeting with the station in-charge every 15 days with the SDOP case diary every 30 days.

In this, it will be ensured whether the action has been taken as per the authority letter.

Chief Minister Chouhan was inaugurating the state-level “Samman’ campaign at Minto Hall today. The objective of this campaign is to ensure active participation of the society in the eradication of crime against women, to create a respectful and favourable environment for women and girls and to make the common people aware of the legal provisions in such a way that they are able to fulfill their responsibility towards the safety of women. Senior officers of Home department as well as Women and Child Development and Public Relations Department were present in the programme. Chief Minister Chouhan awarded citations to 6 courageous citizens of the state through Collectors and SPs of their districts. These citizens played a role in nabbing various criminals.

Chouhan said that death penalty was given to 05 accused in Bhopal, Chhindwara, Indore and Narsinghpur in the year 2020 for crimes involving minors. In the last 09 months, there has been a decline of 19 percent in rape cases, 23 percent in kidnapping and molestation cases, 20 percent in female foeticide, 14 percent in crimes related to molestation and outrage of modesty.

In the first two months of the year 2020, the percentage of redressal of cases was 44, which rose to 65 percent in the second half (July to December). Taking effective action against sex offenders, property worth more than Rs 23 crore of such criminals were freed from possession in Bhopal, Ujjain, Jabalpur, Chhindwara, Narsinghpur, Dhar and Morena districts. Along with this, action was taken against them under NSA, Zilabadar etc. Drivers license of vehicles used in crimes is also being revoked. Drugs worth more than Rs 75 crore were seized under anti-drug campaign.

About one lakh families were successfully saved from destruction. Arrangements are being made equip vehicles with panic buttons so that women can inform in the event of crisis. The Chief Minister said that at present, different helpline numbers are operated for reporting crimes against women. Steps will be taken to merge them into one.

All officials from SP to DG will conduct reviews

Chief Minister Chouhan said that the Superintendents of Police will be the first to review cases of missing girls. After this, the Regional Inspector General of Police will conduct a zone level review. The information collected by the Director General of Police will be reviewed after a complete review in all police zones of the state. The families of the missing children will be heard on priority in Jan Sunwai to be held at the Superintendent of Police Office. Registration facility will be available for those going out of the district for work. One stop centres will be strengthened. A study related to abducted girls in the state will also be conducted. On this occasion, Chief Minister Chouhan informed that the those guilty of Sidhi rape have been arrested immediately by the police. The Chief Minister also congratulated the Madhya Pradesh Police for taking effective action.