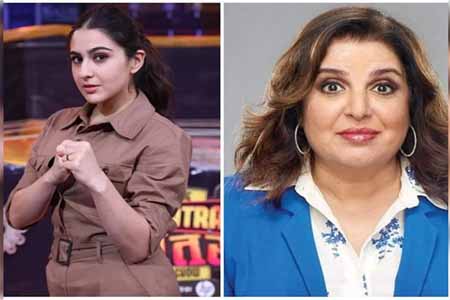 ‘The Khatra Khatra Show’ on Voot has undeniably carved a niche for itself in the Indian reality show space by giving entertainment an innovative twist with its never-seen-before format. With the OGs of entertainment, Bharti Singh, Haarsh Limbachiyaa and Farah Khan, taking the reins of comedy in the show, viewers are surely in for a riot of laughter!
Bollywood diva Sara Ali Khan recently graced the show with her electrifying presence as a special guest to take on some “Khatra Khatra” challenges. In a fun task, she had to perform the hook steps of popular Hindi songs played by the hosts, but with a hilarious twist! Upon being unable to recall the hook step of a Bollywood song, Sara got a kick from behind by a statue of her father, Saif Ali Khan. A wave of laughter ensued with the way she jumped on the floor after getting kicked, leaving Farah Khan impressed. In a side-splitting reaction, Farah joked about casting Sara Ali Khan in her next action movie!
To witness more such rib-tickling instances featuring your favourite celebrities, tune in to ‘The Khatra Khatra Show’ on Voot!