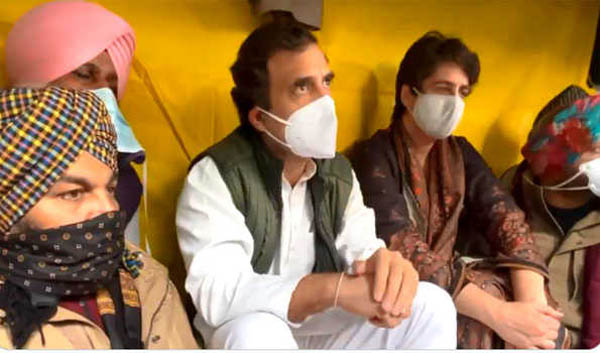 New Delhi,  (UNI) Congress leader Rahul Gandhi on Friday slammed the BJP-led NDA government at the Centre, saying Modi government's ego will bite the dust and it will have to repeal the three contentious farm laws.

Sitting outside the residence of Delhi Lieutenant Governor Anil Baijal to protest against the farm laws, Mr Gandhi said, "Modi-Maya is broken, the ego of the Modi government will also be broken, but the spirit of the Annadata (farmers) is neither broken nor shall be broken. The government will have to withdraw the anti-agriculture law!"

Mr Gandhi was accompanied by his sister and AICC general secretary Priyanka Gandhi Vadra along with several party leaders.

In a tweet, the Gandhi scion said entire country is raising its voice against the atrocities on farmers and rising prices of petrol and diesel. He further urged the countrymen to join them against "the arrogant Modi government for their rights".

On the resignation of Bhupinder Singh Mann from the Supreme Court-appointed four-member committee formed to look into the farm laws, he said, "Maya shabd suna hai aapne? Maya hai maya, poora ka poora, media -created maya hai aur yeh maya tutne wali hai. Jis din yeh maya tutti us din phir dekhna kya hota hai. (Have you heard the term illusion? All of this is a media-created illusion, which is nearing its end. Just wait for the day this illusion breaks and see what happens.)"

Delhi Pradesh Congress Committee (DPCC) president Anil Chaudhary who was leading the protest said that these three 'black laws' (farm laws) are against the farmers. "Every Congress worker on the directions of party president Sonia Gandhi will today gherao the Governor Houses all over India," he said.

The Delhi Police has placed barricades to prevent the protestors marching ahead. The party persons were seen pushing the barricades.

The Congress is observing Kisan Adhikar Diwas today in support of the farmers' stir. The ninth round of talks between the Centre and protesting farm unions today failed to resolve the deadlock.

The next round of talks is scheduled for January 19 at 1200 hours.

The farmers stuck to their original demand of repeal of the laws and rejected the government's offer of amendments.

Union Agriculture Minister today too reiterated that the government has no prestige issue or ego and it is ready to make amendments to the farm laws and hold talks with the representatives of farmers' union to resolve the issue.