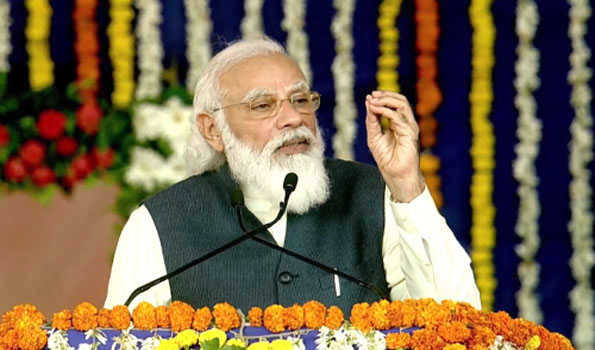 Kutch (Gujarat), Dec 15 (UNI) Prime Minister Narendra Modi on Tuesday said farmers were being misled about agriculture reforms and the reforms were exactly what farmer bodies and even opposition parties had been asking over the years.

The Prime Minister who unveiled various developmental projects in Gujarat including a desalination plant, a hybrid renewable energy park and a fully automated milk processing and packing plant, reaffirmed his government’s commitment to the welfare of farmers and said his government would always address their (farmers’) concerns.

He said a ‘’conspiracy’’ was going on around Delhi to confuse farmers and they were being told that after the new agri reforms, their land would be occupied by others. ‘’Tell me, if a dairy has a contract of collecting milk from you, do they take away your cattle too?’’ he asked:

He said one had to keep up with the changing times and embrace global best practices and lauded the farmers in Kutch saying they were now exporting fruits abroad.

This indicated the innovative zeal of farmers, he said and added that agriculture, dairy and fisheries sectors had prospered in Gujarat over the last two decades due to minimum interference from the Government. ‘’What Gujarat did, was to empower farmers and cooperatives.’’

The Prime Minister recalled the moment in time when the people of Gujarat had a ‘simple’ demand - to get electricity during dinner time. Things had changed so much in Gujarat and today’s youth in Gujarat were not even aware of the earlier days of inconvenience, he said.