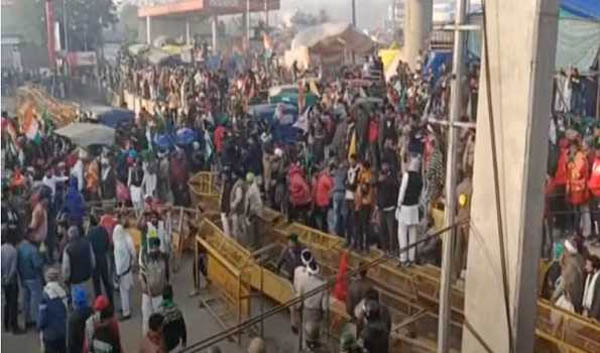 New Delhi, Jan 26 (UNI) Violence erupted at Delhi's Tikri, Singhu and Ghazipur border on Tuesday morning as hundreds of farmers broke barricades while police used mild lathi charge and tear gas to stop them, reports said.
At the time of filing of this report, the farmers had reached the Kashmiri Gate.
As per reports, clashes were also reported at Delhi's Mukarba chowk where farmers have broken cemented barricades.
The farmers have breached the barriers at the Nangloi. As per Delhi police, the farmers were supposed to move ahead with their tractor rally towards Najafgarh, however, a certain section of protestors decided to march towards central Delhi.
Hundreds of farmers have reached Delhi Akshardham Temple, both by foot and tractors, in an attempt to reach historic Rajpath in central Delhi for a march. However, they have been halted by the police.
The situation, as per reports, is becoming tense, as farmer numbers are rising at the temple road.
No casualties have been reported so far.
As per the plan approved by the police, the farmers were allowed to take a march at three circular routes from Ghazipur, Singhu and Tikri border only after the Republic Day parade at Rajpath.
The march planned by farmers was to show their unity against the three recently passed farm laws which allows private players to enter the agriculture sector.