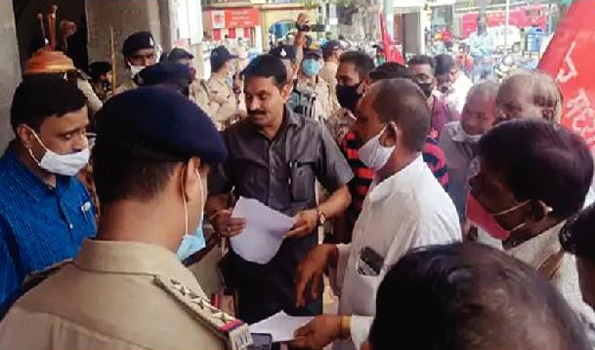 Chronicle Reporter, Bhopal
In Gwalior, there has been a clash between the police and the farmers in the rail roko agitation of the farmers. As soon as the farmers came out of the Phoolbagh ground to stop the trains, the police tried to stop them at a distance. On being stopped by the police, the farmers protested strongly and sat on the road there. Some even lay down. After this, the police force immediately picked them up and put them in the vehicles.
During this there was a heated argument between the farmers and the police. But the police force was in large numbers. About 40 people were arrested and sent to the temporary jail DRP line in a police vehicle. The farmers had warned of agitation, protesting against the farm laws and the Lakhimpur Kheri incident. During this time the station was also placed under the special protection of the police. Police were also deployed on all roads leading to the station. The RPF team was seen patrolling the tracks.
AIKS (All India Kisan Sabha) had announced rail roka movement on Monday afternoon in protest against the three agricultural laws of the central government and the Lakhimpur Kheri incident. After the warning of rail roko movement, the intelligence officers came on alert mode.
Along with the GRP, RPF, the local police were also ready. As soon as AIKS farmer members started gathering at Phulbagh on Monday afternoon, the police converted the road from the station to Phoolbagh into a police camp. The farmers had gathered and left for the station. They had just reached in front of Laxmibai Samadhi, 100 meters away from Phoolbagh, when the police officers stopped them there. They told that there is a ban on any kind of demonstration and stopping the train is a crime. The farmers were adamant on this and started moving ahead to stop the train. When the police stopped again, AIKS members and state secretary Akhilesh Yadav had an argument with the police officers.
After this the AIKS members sat on the middle of the road and started raising slogans. The police started putting them in the police vehicle parked nearby. Around 40 people were arrested in about 20 minutes. Putting everyone in the car, the police took them to the temporary jail built in the DRP line.

Govt trying to suppress farmers’ voice
After the arrest, farmer leader and AIKS state secretary Akhilesh Yadav said that the government is trying to suppress the voice of farmers with the help of police. But let us tell that the police cannot crush our movement. We are fighting against the agriculture law and will continue to fight. AIKS will continue to fight until the law is withdrawn.
Before the Rail Roko movement, a joint meeting of the police and the administration was held with the farmers in the Police Control Room. In this, ADM HB Sharma and Additional SP Satendra Singh Tomar discussed the nature of the agitation with the farmers. The farmers said that they would stop the train at Dabra and Gwalior stations. There will be no effect of agitation at Antri and Rairu stations. Both the officers asked them to conduct a symbolic agitation. If there is work against the rules, then they will be arrested. But the members of AIKS, bypassing the advice of the administration, went out to carry out the movement.