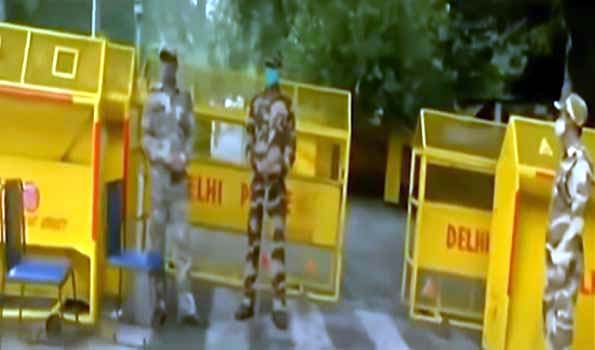 New Delhi, Jul 22(UNI) Security at Jantar Mantar has been tightened ahead of farmers' stir demanding revocation of three controversial farm laws.
On Tuesday, the Delhi government and police permitted the farmers' to protest at the historic Jantar Mantar from July 22 to August 9 between 1100 and 1700 hrs.
The authorities, however, capped the permissible limit of agitators to 200 for Samyukt Kisan Morcha (SKM) and six for Kisan Mazdoor Sangharsh Committee (KMSC).
Police said adequate security arrangements are in place at Jantar Mantar, Parliament where monsoon session is underway and surrounding areas.
As per the police, 200 protestors from SKM and six from the KMSC will leave for Jantar Mantar from the Singhu border with a police escort. They will return to the Singhu border by 1700 hrs in the same manner.
The police have asked the umbrella body of the farmers' union SKM to hold the protest peacefully within the allotted space, follow the COVID-19 guidelines and return on time.
Hundreds of farmers have been protesting at three borders of Delhi--Singhu, Tikri and Ghazipur --since December last year against the farm laws, which they think are "anti-farmer and pro-corporate".
Several rounds of talks between the farmers' union and the government have failed as the former sticking to their main demand--repeal of the laws.
Though the government has not yet agreed to their demand, however, it has withheld the laws for 18 months.
The protest earned a bad name after the tractor parade organised by the unions on January 26, Republic Day, turned violent, as several protestors allegedly deviated from the assigned route, clashed with the police and planted a religious flag at the historic Red Fort.